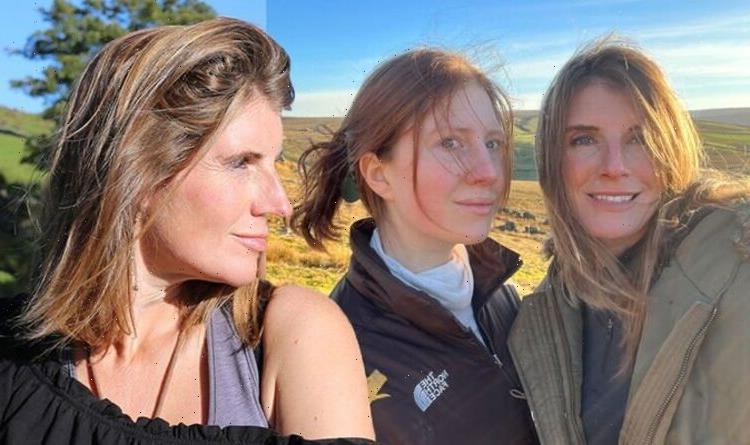 Amanda Owen, 47, has revealed in recent days she has felt “under the weather” and even “narky” prior to her daughter Raven, 21, visiting her at the family’s desolate farm in Yorkshire. The Shepherdess admitted that her eldest child returning home yesterday had “put a spring” back in her step after feeling not too brilliant as of late.

On Twitter, Amanda typed: “I’ve been feeling ‘under the weather’ & narky but Raven landing back has put a spring in my step.”(sic)

The TV farmer proceeded to list all the tasks Raven had completed on the farm while celebrating her milestone birthday.

Amanda continued: “She milked Buttercup, lambed a breech presentation, shoved a prolapse back from whence it came (a sheep’s btw) all on her 21st birthday!”(sic)

Besides the tweet, the Yorkshire Shepherdess shared a stunning photo of her and Raven as they posed against a rural backdrop.

In a second snap, the 21-year-old can be seen caring for sheep while wearing khaki trousers tucked into matching Wellington boots.

Raven then removed her blue raincoat to reveal a burgundy colour Bardot style top as she tended to one of the farm’s brown cows.

After a busy day of performing labour on the farm, Raven enjoyed a delicious homemade walnut cake as she celebrated her birthday alongside her eight siblings.

In response to the post from Amanda, fans sent Raven their best wishes, as they claimed: “The apple doesn’t fall too far from the tree”.

While Bevdry said: “What an amazing young woman. Happy 21st.”

The Yorkshire Shepherdess has been sharing frequent updates on the happenings of the farm since lambing season began recently.

The show follows Amanda and her brood as they reveal the highs and lows of living and working on a farm.

Whilst appearing on the Welcome to Yorkshire, Talkshire podcast with Caroline Nickle, Ben opened up about his first time meeting the Owen family.

Caroline asked: “The Yorkshire Shepherdess Amanda Owen and her amazing family, with nine children and sort of too many animals to even count, has become a big TV hit with Our Yorkshire Farm, and you met her in the early days!”

Ben revealed: “I went to stay with Amanda and her family about five or six years ago as part of my series New Lives in the Wild.

“We thought it was an interesting story, Amanda former model who is obviously from Yorkshire but had left for a period of time.

“So I spent a week with the Owen’s, and I knew then that they were an extraordinary family, I found them inspiring, uplifting, amusing, funny, all of those things.

“Obviously, the success of her and her family on my series turned into this extraordinary series that she now does but has so many fans, and I totally understand it.

“She is amazing, she is honest, she’s gritty, she is willing to take risks, and I think a lot of people admire that honesty!”