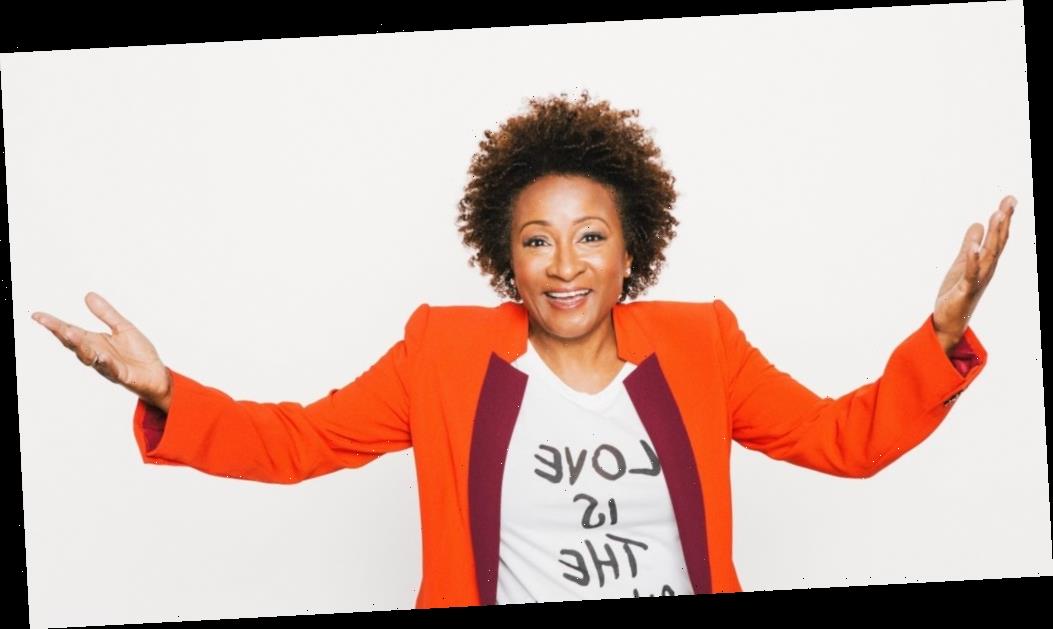 With over two decades of work under her belt, Wanda Sykes has found that being a multi-hyphenate artist certainly allows for a diverse and successful career. Starting off as an award-winning writer for The Chris Rock Show, she quickly found popularity with her stand-up specials, leading to roles in Monster-in-Law and The New Adventures of Old Christine. 2020 has given Sykes four Emmy nominations this year—two under her production company Push It, one for the role of Gladys in Crank Yankers, and one for her performance as legendary vaudeville entertainer Moms Mabley in The Marvelous Mrs. Maisel. Sykes describes this surreal pandemic year thus: “2020, for me, the glass is half-full. But it’s a dirty glass. It’s like from a crime scene with lipstick and fingerprints and smudges all on it.”

That whole ‘camera right, camera left’ thing. It was Nutty Professor II and Eddie [Murphy] plays all those different characters. A lot of my takes, I’m talking to a tennis ball and so, they would say, “When you look at the tennis ball, look camera right, or camera left,” and I just kept getting it wrong. I finally said, “Okay, wait a minute. Just say right or left because it’s the opposite from where I stand.” And I just thought that was ridiculous, learning camera angles, because I was working with a tennis ball.

The Best Advice I Ever Received

It was from Chris Rock. I was shooting my first special [Wanda Sykes: Tongue Untied] and I said, “Chris, okay, so give me some advice.” And he said, “Make your special, special. Don’t go do a set. Do a special.” And I was like, “Okay, that makes sense.” And I’ve always followed that, made my specials special. It has to be memorable. You want the audience to be able to at least quote something or yell a line back at you when you’re walking down the street. Just be a little risky and step outside of your comfort zone and make it sharp. Make sure everything flows and don’t waste any time. Just solid bam, bam, bam, jokes.

The Part I Always Wanted

I just love Mrs. Maisel. So, just to be asked to be on the show, I was like, “Of course.” But then to play my comedy idol Moms Mabley, if it wasn’t for Moms, I probably wouldn’t even be doing stand-up. I think that’s why you don’t need a lot because it’s such a huge character I’m playing. For me, it was like, “Oh my God, not only do I get to play Moms, but I get to play her on the Apollo stage? Are you kidding me?” It was just the best. According to my mother, I’ve been preparing for that role since I was a kid because she said, “You used to walk around the house with a dust cap over your head, and you would do Moms all the time.”

I would love to get in one of those Marvel movies, but I want comfortable shoes. I don’t want to be one of those superheroes with the high-heeled boots and everything. I’d even wear the suit as long as I could get into those nice flat nurse shoes, maybe a kitten heel. It’s a practical thing. You’re saving the world, why do you need to wear heels?

My Most Iconic Role

I not only know Moms Mabley, but I know her routines and her mannerisms—so, I just went back and watched more clips of her on YouTube. I always go back and listen to her albums, so I went back and did that. And then the wardrobe, hair and makeup team that they have over there at Maisel, they did the rest. I also appreciated the storyline because at the Apollo, that was Moms’ home, she was the queen there. So, for her to be bumped in her own home by a white girl, I’m sure it happened, but it reflects what was going on during that time. And you could just feel that Moms was like, “Well, okay. This is life. It’s not the first time that’s happened to me.”

Being on time. That’s probably the biggest challenge in life. In high school, I never made it on the bus on time. Luckily, my dad had to pass by my school on the way to work at the military base. So, I just stopped trying to make the bus. I don’t think I was ever in my homeroom class; I would just go to my first period. I don’t know what happens. I get up early and then somehow, I walk out the door, I get in my car and I go, “I forgot something.” I go back in and then… I don’t know what happens. It’s the worst.

The Films and Television That Make Me Cry

I’m still in menopause, sometimes commercials will make me cry now, it’s ridiculous. And also, I watch a lot of stuff with my kids, and oh my God, those things, please, it’s so sad. What was the last one? Onward. Oh my gosh. You start off with the dad is already dead and then only half the dad comes back. He’s just a pair of pants. What the hell, man?

“Let’s Groove Tonight” by Earth, Wind & Fire. What else do I like? I mean, I destroy it, but “Since You’ve Been Gone” by Kelly Clarkson. I do a full, open throat, loud screaming, just awful. It’s so bad. So bad. And a new one I’ve been doing is Macy Gray, “I Try”. Oh boy, I croon on that one.

The Most Fun I’ve Had On Set

It was on the Breaking News in Yuba County set last summer. We were down in Natchez, Mississippi with [director] Tate Taylor. And man, did we have a good time. It was like camp. Most of us stayed at Tate’s house. We would hang out, have dinner together and after work, we’d all sit on the porch, drinking martinis. And everybody brought their dogs. So it was a lot of fun.

I think maybe Ruby from Monster-in-Law. Because she was just pretty straightforward and when she got pissed, she’d let you know she was pissed. Actually, a lot of my characters are like that, huh? A lot of it is, “Hey, who’s the voice of reason? Who’s looking around, telling these people they’re nuts?” Or it’s, “Bring in the joke. Joke, coming in hot.”

90 Day Fiancé. Oh, man, that’s just good trash TV. It’s so good because these are just people who are honest with themselves. They’re like, “What do I have to offer? Oh, I know, a green card.” They know that’s their selling point. So, they go to these other countries and they get these people who are way out of their league, but they know, “Hey, I got this green card for you. That makes me cute.” It’s like, “In real life, I’m like a five, but I could get you a green card, that makes me like a seven-and-a-half or an eight.”

Lines People Quote At Me

I get a lot of Esther [her stomach’s name] from my special. People love Esther. From Crank Yankers, they love Gladys Murphy’s turd in the back seat. And I get some stuff from Curb Your Enthusiasm. They go, “Hey, Wanda.” And I’m like, “Hello.” They go, “I’d know that tush anywhere.” Luckily, they don’t say that while standing behind me.  That’d be creepy.