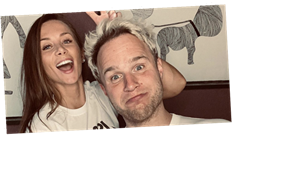 Olly Murs has revealed his girlfriend Amelia Tank is paying the bills and has confessed he'd love to be a stay-at-home dad.

The 36 year old, who recently paid tribute to his late pal Caroline Flack six months after her death, appeared on Loose Women alongside Mark Wright, 33, and Marvin Humes, 35, to discuss how they feel about their significant others being the breadwinners and earning more money.

Speaking to Olly, Mark said: "I remember you saying to me when you first got with Amelia, you was like, 'Ah there's something I love about her Mark…' and I was like, 'What's that?' and you said, 'I asked her to move in and she said I'll move in, but I'm only moving in if you allow me to pay a percentage of the mortgage.'

"And you was like, 'No, no you're not paying nothing, this is my house, I live here anyway.' And she wouldn't move in until you allowed her to pay that, which, you know, that's incredible." Olly replied: "No, no, she is. Like I said, at the moment, it's fantastic and she's brilliant and because my work is just completely cancelled at the minute, I'm not doing anything – I'm self-employed – so for her, she's working full-time, she's actually paying the bills. So yeah, it's great."

Throughout the conversation, Olly brought up the possibility of having children with his 27 year old fitness fanatic girlfriend and even confessed that he would love to be a stay-at-home dad.

Unable to resist asking about it, Loose Women panellist Stacey Solomon said: "You've spoke a lot about kids today Olly!", while Judi Love asked whether he wanted to share any "extra information".

However, Olly insisted that he was just joining in on the conversation with Mark, who is married to 33 year old actress Michelle Keegan, and Marvin, who shares daughters Alaia-Mai, seven, and Valentina, three, with 31 year old wife Rochelle Humes – who is expecting her third child.

Troublemaker singer Olly said he isn't planning on having kids of his own any time soon.

Earlier in the interview, Marvin revealed how happy he is for his wife Rochelle that she earns more than he does as he said: "I'm absolutely buzzing that Rochelle earns more money than me to be honest, I think it's brilliant."

All the best celebrity throwback pictures, can you guess who they are though?

To which Mark replied: "If Rochelle earns more money than you, she must be absolutely caked!"

"It's nice that my girls see their mum so busy and working so hard to achieve what she wants, I have no problem with it whatsoever."