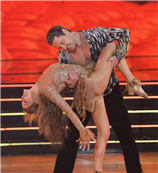 Olivia Jade Giannulli lied and cheated her way into college.

This much has been established already.

Heck, her famous mother went to jail for her role in an admissions scandal that involved bribery and forgery, as Olivia agreed to pretend she was a member of her high schooll rowing team in order to get into the University of Southern California.

But anyway, though. Where were we?

But the social media influencer would not like to make something clear:

She would never lie or help someone cheat on his or her spouse.

The topic is relevant because a TikTok user shared a since-deleted video last week in which she alleged that a Dancing With the Stars celebrity has been getting cozy with his/her married partner.

While the user didn’t cite anyone by name, many assumed that the video was referencing Olivia and and Val Chmerkovskiy, who has been married to professional dancer Jenna Johnson since April 2019.

“Hey guys, I just wanna clear the air before this goes any further or this video blows up anymore,” Giannulli said in a TikTok video of her own on Sunday.

“First of all, the woman that posted it blocked me. Someone had to send me this video.

“I’m just going to be super blunt and straight up, and just say that Val and I are not hooking up. We’ve never hooked up.

“This is a complete rumor; we are genuinely good friends and I adore his wife.”

“It’s just a dance show and we’re just friends. I don’t know why everything has to be something, but I’ve already obviously seen a ton of negative comments.

“And I’d get it if it was true, but it’s not, so let’s end this here and let’s f–king dance and have fun on this show, and not create lies especially when you also have almost 400k followers.

In 2019, Olivia’s parents, Lori Loughlin and Mossimo Giannulli, were indicted for allegedly paying bribes to USC in order for Olivia Jade and her sister, Bella Giannulli, to be admitted.

They both served sentences in prison and paid a combined $400,000 in fines.

Many observers were shocked to see Olivia cast on Dancing with the Stars, considering the part she played in this scandal.

Following the first week on Dancing With the Stars, though, Chmerkovskiy spoke out on her partner’s behalf.

“I think this is a great experience for Olivia, but this is an experience that she has — and continues to — earn every single da.

She came into the room with the desire to do her best, to learn the craft.

“She respects the show, she loves the show, she’s a fan of the show. All I want to do is teach her how to dance and let her shine.”

“Now, she’s taken all the qualities that all the folks in her life gave her and she’s carrying them forward with a lot of pride and grace and I’m just a small part of her story.

“Her story’s gonna be long and prosperous and beautiful and I’m excited.”