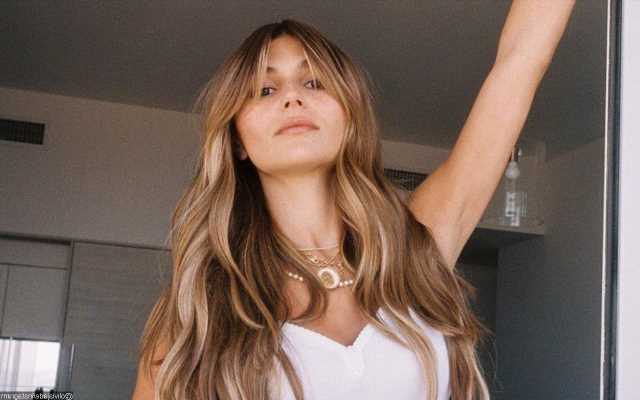 In a debut episode of her new podcast, ‘Conversations with Olivia Jade’, the daughter of Lori Loughlin brings along a Beverly Hills-based psychologist to discuss self-forgiving after a mistep.

AceShowbiz –Olivia Jade opened up about the constant guilt and stress that she suffers following college admissions scandal involving her parents. In a debut episode of her new podcast, “Conversations with Olivia Jade”, on Monday, October 25, the Instagram influencer talked about self-forgiving after a mistep.

In the episode, the daughter of Lori Loughlin brought along Hillary Goldsher, a Beverly Hills, Calif.-based psychologist, to discuss the matter. Hillary noted making mistakes was part of being human, adding that the most important thing was how a person reacted to the mistakes.

“I think also that’s just so, for my certain situation, like, that’s so hard for me to get to that point of like, ‘It’s OK, Olivia, you didn’t know back then’ and then you obviously have so many people online being like, ‘You should have known. You should have done better. This shouldn’t have happened in the first place,’ ” Olivia divulged. “And then you have people telling you, like, ‘Well, clearly you haven’t learned anything still.’ “

The 22-year-old admitted to finding the latter judgement frustrating. “A, you don’t know me. How do you know that? And B, I would be crazy to not have learned anything from this situation of just constant, like, guilt and stress that I have given to myself,” she explained. “And waking up every day for almost two years straight and seeing something written about you…. And I’m not saying this to throw myself a little pity party. … Obviously, we really messed up.”

The “Dancing with the Stars” contestant claimed that it was really challenging for her to “let go of so much guilt.” She went on to say, “I feel like I walk on eggshells when I talk just because I don’t want to say the wrong thing – and I want to make it clear to people listening that I’m not trying to victimize myself – but I also am trying just from … having this personal experience, like, I really do understand how different of a person I’ve become because of it, and not entirely in a good way.”

“Sometimes, like, I really do feel like I have way harder days or like I’m way harder on myself. And I’m so scared, like, looking at my name that something bad is happening, and I’m the face of it. And it’s gonna be, like, this big thing that blows up in my face again. … You live your life a little bit differently, in my opinion,” Olivia continued. She credited therapy for how she coped with the struggles.