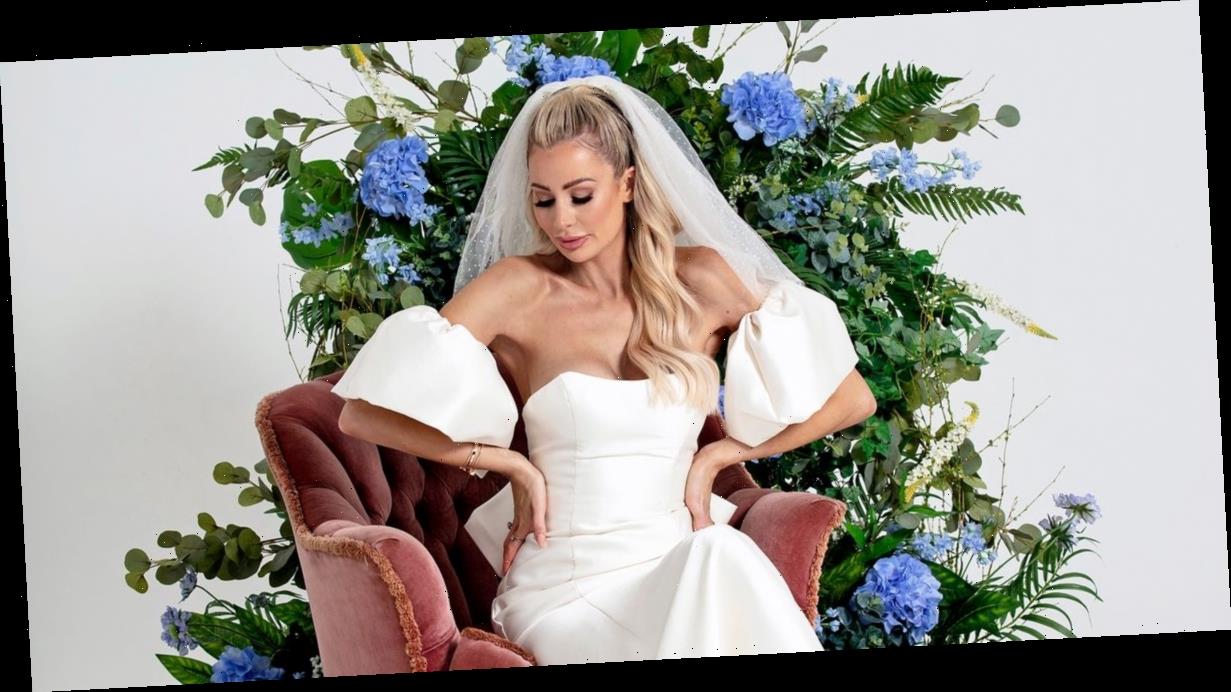 Dressed in a beautiful white wedding dress and smiling from ear to ear, Olivia Attwood looks every inch the picture-perfect bride during our exclusive shoot.

“I’m honestly having my Sex And The City, Carrie Bradshaw moment,” says the beaming bride-to-be, who is trying on a variety of dresses – and a tuxedo – for the day. She admits, “This was also really good research for me when it comes to getting my actual dress. I’ve been so indecisive and driving everyone crazy!”

We’ve always adored the Love Island and TOWIE star for telling it exactly like it is, so we can’t wait to see her brand new ITVBe reality show, Olivia Meets Her Match, which will follow Olivia as she plans her wedding with her fiancé – Blackburn Rovers footballer Bradley Dack.

The couple, who got engaged in October 2019, hope to tie the knot next year, and while their dreams of marrying abroad have been scuppered, Olivia tells us they’re still planning a “wild” affair in the UK.

Here, the 29-year-old exclusively tells OK! about landing her dream reality show, why she won’t be saying goodbye to TOWIE for good and reveals she’s completely taken over all the wedding plans…

It’s going smoothly, but I don’t know who out there says it’s a romantic time. Whoever tries to romanticise it needs to be sued because it’s not romantic. I keep saying to Brad I want to make sure we don’t lose sight of why we’re actually getting married.

Well, you look amazing in these dresses. Have you enjoyed trying them on?

It’s been so much fun. At first I wanted my dress to be slim-fitted, tight, with loads of lace and showing quite a lot of flesh. Now, since I’ve been trying on dresses, the only ones I feel really like a bride in are the big ones. But part of my brain still hates the big ones on paper.

You were pictured going wedding dress shopping with your mum. Were there any tears?

No. As a family, we don’t cry at all. We’re all dead inside. It’s hard because I wanted to take my maids of honour, but because of coronavirus you’re only allowed to have one person with you in the shop – it sucks. I was lucky to have my mum there but what I like and what she likes are quite different. She’s very opinionated. We bickered a bit that day, it was quite funny.

Are you secretly a bit of a bridezilla? Would Brad say so?

[To Brad] Brad, am I a bridezilla?

Olivia: Stop being stupid! I know what I want but I’m not a bridezilla.

Has Brad been really involved in the planning, or have you taken over?

I’ve completely taken over, it’s me and Julie [the wedding planner] against the world. He’s not interested. If we waited for his football schedule and my schedule to marry up we’d never get anything done. He’s not available enough for me to wait around for him. He’s doing such extensive rehab right now [Brad suffered a knee ligament injury in December] that when he comes home from training, he’s so tired. The last thing he wants to do is to traipse around a manor house. It’s been a long road with Brad’s recovery. We’re looking to buy a house, but it’s hard because we’re always at the mercy of football. We’re not going to blow the bank and buy our dream home because we know we won’t be there forever, as sad as that is.

Have you had to postpone anything to do with the wedding?

The only thing that’s been massively affected is that the wedding is now not abroad. We didn’t have anything booked that we’d have to move or cancel so that’s good. We were quite deep into wedding venue searching abroad and we pulled the plug on it. We don’t want to be in a situation where we don’t get to see the venue again until the day we get married. That for me was too anxiety-inducing. But there are worse things happening so it’s not a big deal. We’ve started looking at UK venues. You’ll see on the show there are a few ups and downs with that.

Do you want a big wedding?

It’s going to be wild! One of the reasons we’re struggling with venues is because we want one that doesn’t have a cut-off time because I want it to go on all night. My friends and family are not the kind of people who are happy to stop at 1 or 2am. We want a big wedding. I’d be happy to reduce it, but neither of us would be happy to take it down to 30 because that’s just not us or what we want.

Do you love celebrities, fashion, home interiors and beauty? Then do not waste another minute of your time and sign up to our daily newsletter, where you will receive all that – and more – straight to your inbox at 5pm every day.

From exclusive at home tours, cleaning hacks, the latest in beauty trends – and of course, all the latest celebrity gossip, look no further.

Pop your email address in the box at the top of this article, and et voila! Enjoy

Who have you invited from Love Island and TOWIE?

I haven’t been able to invite everyone I want, but Amber [Davies], Nicole [Bass], Clelia [Theodorou] and Chloe Sims will be invited, and Kem [Cetinay] probably. We’re friends again now. In terms of the bridal party, it’s really hard. We’ve both got massive friendship groups and it’s going to be really hard to please everyone. The easiest thing to do might just be to have best men and maids of honour. I haven’t officially asked my maids of honour yet, but I’m having two so my sister’s chances are at 50% [laughs].

How would you describe Olivia Meets Her Match?

It’s an all-access show about my life and everything that comes with it. It’s the first time anyone’s really seen Brad on TV or us together. It’s about wedding planning, our life in Manchester and football. There’s more to me than what you see in one show so it’s good for people to see the other side of me. I’m so excited about it. It was quite unexpected. After Love Island I did the show with Chris [Hughes] which was a nightmare. We had a terrible time together. I always felt a bit cheated in a sense – I knew I loved making the show, it just didn’t work with him. I’d always said to ITV that I’d love to have another go and they said, “When the time is right, it’ll be your time.”

How did Brad find being filmed?

When I first suggested I was going to take on the show, I said I wanted him to film with me because it would be weird if he didn’t as my fiancé, but I wouldn’t put any pressure on him. He’s surprised me so much because he’s so natural on camera. The producers were like, “He’s professional!”

And how do you feel about leaving TOWIE?

I have mixed emotions. Just as I’m leaving, Fran [Parman] and Nicole [Bass] have returned, who are two of my best friends on the show. I loved making the show so it’s definitely not goodbye forever. To the girls that hate me: don’t throw a leaving party just yet. I’ll be back!

How did you feel about TOWIE receiving complaints that accused yourself, Clelia Theodorou and Nicole Bass of bullying Chloe Brockett?

I don’t want to throw TOWIE under the bus, but everyone who was there that night and even the people who worked there spoke out to say that unfortunately what you saw in that episode wasn’t how it played out. I was disappointed and shocked. Everyone who was there knows the truth.

What did you think about Chloe calling you a “lanky old troll”?

I can’t even talk about her because I feel like I’ve already given her a really good storyline and loads of press and she doesn’t deserve any more.

Have you been approached to join The Real Housewives Of Cheshire?

When I first moved up here, I made a little guest appearance and it kind of came up. I love the show but I just don’t think I fit with them right now. Brad and I are a bit young, we don’t have kids and we’re not married yet. Maybe in the future.

Will you and Brad start trying for kids once you’re married?

I think it’s in our future. We both want them and I keep talking to all my friends who have kids. They say when you want kids you’ll wake up and know you want kids. Maybe at some point in the next five years I’ll think, “Now is the time.”

You recently posted about being sick with anxiety. Have you ever considered having therapy?

Yes, 100%. My sister said she clicked on something and there were loads of horrible comments [about me]. She said, “I worry about you sometimes, Liv. How do you deal with this stuff?” I had therapy before Love Island before I first got diagnosed with chronic anxiety. It would be good to have someone to speak to so it’s on my to-do list to organise. I think it’s a very healthy thing to do. I know my anxiety is something that’s always going to be there. Every now and then it creeps up on me like a dark cloud that comes out of nowhere. I got to the point where I was spreading myself too thin. I was filming the show, wedding planning, spending too much time on social media and I wasn’t eating enough. I also lost my grandfather and Brad had a setback with his knee and it all got on top of me. When that happens to me I just have to step back and reset.

You’ve also said you have reassessed your relationship with alcohol. Why did you decide to do that?

I’ve always had a not-so-great relationship with alcohol. I’ve definitely used drink as a bit of a crutch when I’ve been stressed. But when I’m having a drink, I’m the best company you’ll have. I’m definitely not ready to go teetotal because I’m very much a party girl. But I go three weeks at a time now without having a drink because I have a much healthier and happier existence with less alcohol in my life. As I’ve got older, I’ve realised there’s so much more I can be doing instead of lying in bed with a hangover.