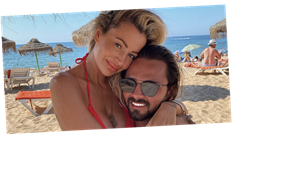 Since finding fame on Love Island in 2017, Olivia Attwood has become quite the reality regular. As well as becoming a frequent face on TOWIE, the 29-year-old has landed her own ITVBe show Meets Her Match, which follows her and her fiancé, footballer Bradley Dack, 26, as they move into their new home and plan their wedding.

“This year’s going to be a year of juggling, still being a present part of TOWIE, but also pursuing my own projects,” Olivia says. “I’d like to always remain somewhat involved because I really love making the show. There are bad days because you have to film with people you don’t want to film with, but I’m getting to go to work and hang out with my friends.”

In fact, Liv has so many mates, including Love Island pal Amber Davies, that she’s struggling to pick her bridesmaids. “I keep going between [having bridesmaids] and not having a bridal party,” she says. “I’ve got such a big group of girlfriends, I know someone’s going to feel snubbed and I hate upsetting people. It’s stressing me out. I’m back and forth every day on it.”

Here, new! magazine chats about TOWIE’s 10th anniversary celebrations, why she makes good TV and her plans for her upcoming nuptials…

It’s TOWIE’s 10th anniversary. Which cast original would you like to magic back to film a scene?

I love Ferne [McCann] – she’s so hilarious and outspoken. We’re quite similar in that way. I know she wasn’t on it for very long, but I also loved Megan [McKenna] and Kirk [Norcross] was always entertaining.

If you’d been in the original line-up and single, who would have turned your head?

They had quite a lot of fit men back in the day. I’ve always been into a bit of a bad boy so whoever was the naughtiest!

You seriously upped the drama when you joined. Will this series be any different?

I wanted to make my presence known. TOWIE is like a pack and when you’re new, you’ve got to stand your ground. I’ve been quite opinionated this series. I just can’t seem to keep my mouth shut! I’ve not turned into a wallflower, by any stretch of the imagination.

Why do you think you make such good reality TV?

I hope that I provide a bit of comedy and relatability. I’m not perfect. I do mess up and I do speak out of turn, but I’ll always own it. I like to share my life with people and let them in and I love that people can relate to me. That might be it, I hope!

I was very boring during lockdown, like the rest of the country, and
I was rather trashy last night. I was out in Manchester – my first night out since coronavirus. Some of the TOWIE lot – Bobby [Norris], Saffron [Lempriere], Matt [Snape]and Nicole [Bass] – were up here to see me. We had some socially distanced drinks outside.

You’re known as a bit of a party animal but did Dry January then were teetotal during lockdown. Do you consciously drink less now?

Yes, 100 per cent. When you get to the other side of 27, it takes three days to recover! I enjoy a drink and a night out, but I definitely have them fewer and far between now. Also, over the last year, I assessed my relationship with alcohol. I’ve gone on a bit of a learning curve with it. I don’t ever drink at home. I just drink when I go out. I opened up recently about suffering from ADHD and alcohol doesn’t do me any favours.

You and Brad got engaged last year. Have you made any headway organising the wedding?

Before coronavirus we had our hearts set on a destination wedding, but I’m opening up to the idea of a UK wedding because we want to get married next year and definitely can’t afford to go into quarantine for two weeks. I’m going to look at some UK venues and see if they can turn my head.

Your relationship was on/off for years. Why do you think you’ve turned a corner?

I don’t think we’d be where we are now if we hadn’t had that
time apart. We both grew up so much and realised how crazy
we are about each other. He liked me before Love Island then realised how seriously he felt so he entered back into the relationship the second time around with a completely different attitude and so did I. Look, we’re not perfect and we work at our relationship, but it’s way more fun than it is work. I don’t want to sound nauseating, but we are a good match.

What kind of wife do you think you’ll be?

When Brad had his injury and surgery at Christmas and I looked after him, he said, “You’re a bit spoiled and you’re a bit lazy around the house, but I’m marrying you because you have my back through everything.” He’s the same with me and supports me. He hates the TV-world interviews and magazine shoots, but does it for me. I’ve also moved my life to the other end of the country for him. It’s give and take.

You both isolated at your parents’ house in Sussex. What impact did that have on your sex life?

I think we had way more sex during lockdown because we had nothing else to do! That sounds really disrespectful, doesn’t it? But they do have a big house. Does that make it any
better? For Bradley, it was probably more [difficult]. He’d be like, “We’re in your dad’s house!” And I’d be like, “Yeah, can you stop saying that?”

Hair! I had to take my own hair extensions out during lockdown. Actually, Brad helped me, which was – as you can imagine – a bonding experience.

Coronavirus put the brakes on this year’s Love Island, which many are saying should be scrapped because of the number of people who’ve appeared in the show and later taken their own life, including Caroline Flack. Should the show end?

I don’t think it should. The tragic things that have happened are not a reflection of the show. The show is so loved by the public, such great light relief and brings people together. In the world at the moment, we’re on the verge of taking the fun out of absolutely everything. Love Island changed my life and [the experience] was one of the best times of my life.

Have you spoken to your ex Chris Hughes lately?

I never shy away from this question – I know he’s completely the opposite – but, no, I never see him.

The new series of TOWIE starts on 13 September, 9pm, ITVBe