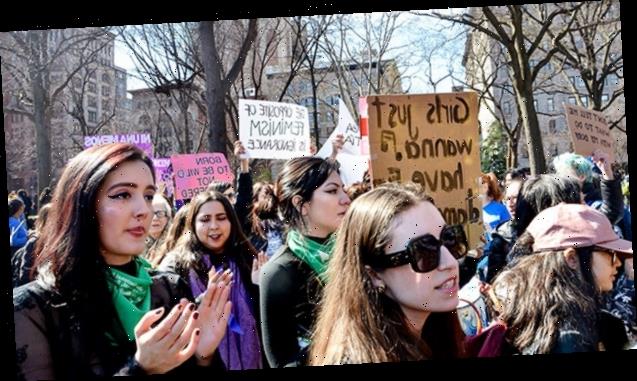 Protesters lined the streets of DC, NYC, LA, and dozens of other cities as they joined the second Women’s March of 2020. See photos from the nationwide marches against Donald Trump.

The threat to reproductive rights in the United States has gotten so significant that the creators of the Women’s March have called an emergency second protest of 2020. On Saturday, October 17, thousands of women, nonbinary individuals, and men took to the streets in Washington, DC and across the nation to let their message be heard: President Donald Trump cannot, and will not, replace Ruth Bader Ginsburg on the Supreme Court with Amy Coney Barrett.

In the meantime, protesters took part in over 100 sister marches throughout the United States, armed with signs, slogans, and a healthy dose of anger. Rather than the ubiquitous hot pink pussy hats, the must-have accessory for the events were protective face masks. As the COVID-19 pandemic rages on, the Women’s March organizers required marchers to wear masks, attempt to social distance, and stay at home if they felt ill. One protester in DC carried a sign which read “Free Melania” in reference to Melania Trump, while thousands of others wore protective face masks and carried signs which featured images of the late Ruth Bader Ginsburg. Scroll through the gallery above for more pictures from the October 2020 Women’s Marches around the country.

Trump and Senate Republicans’ insistence that they rush forward a Supreme Court nomination less than three weeks before a presidential election is bad enough; nominating someone like Barrett, an ultra-conservative judge with ties to a religious sect that inspired The Handmaid’s Tale, is almost comically terrible, especially considering everything RBG stood for.  The October 17 march comes just two days after Barrett’s Senate hearings concluded, and the nation waits to hear if her nomination goes through.

“If Donald Trump is allowed to appoint another Supreme Court Justice, Roe v Wade will be overturned,” the Women’s March organizers said in a statement. “It’s that simple. This is everything that the Women’s March has warned about since day one of Trump’s presidency. This is the moment we’ve been preparing for… The only thing that will stop Trump and Mitch McConnell from stealing another Supreme Court seat is millions of women in the streets—and defending this seat just became THE defining issue for the millions of women who will decide this election.”