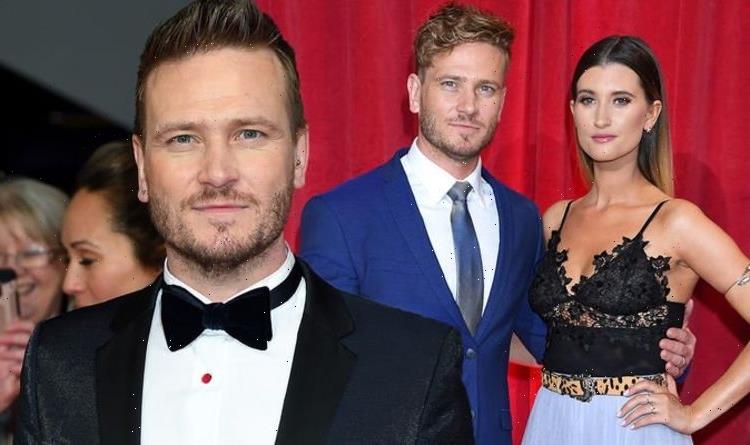 Charley Webb and Matthew sort out the children's toys

Matthew Wolfenden, 41, took to Instagram today to shut down any notion that he intends to have more children with his wife, fellow Emmerdale star Charley Webb. His reaction came after Charley, 33, hinted in an earlier post that she might be up for growing their family in the future.

A few hours ago, Charley sent out an “ask me anything” request on her Instagram, sharing her answers to her fans’ questions on her story.

She posted one particularly cute snap of her three young children out for a winter walk on her story for her 519,000 followers to see.

Under the picture, the anonymous question read: “Would you have any more children? Xx.”

In response, the star wrote: “I do love the chaos of lots of crazy kids so maybe.”

READ MORE: ‘Get on with it!’ James Martin fumes at Remainers as Brits ‘kick off’

However, her husband Matthew seemed very against the idea, as he took to his own Instagram to share his thoughts on the situation with his 181,000 followers.

The star crossed out his wife’s response and wrote “NO!” in large yellow letters over the picture with a crying-laughing emoji to show he wasn’t being entirely serious.

The proud dad shared a series of adorable snaps on his story today, documenting a family day out in the park with his three sons and their pet dog.

Matthew and Charley are parents to Buster, 11, Bowie, five, and Ace, two.

The soap stars met on the set of Emmerdale 15 years ago, hitting it off straight away.

Charley joined the iconic show in 2002 as a teenager, playing the role of Cain (played by Jeff Hordley) and Charity’s (Emma Atkins) estranged daughter Debbie Dingle.

The pair began dating in 2007 and announced they were expecting their first child in 2009.

Matthew went on to propose to Charley on Christmas day of that same year, and the couple welcomed their eldest son Buster in April 2010.

While the actors reportedly split in 2013, they later patched things up and Charley gave birth to their second son Bowie in December 2015.

The couple’s final child Ace was born in July 2019, but it seems like they might not have given up on the idea of expanding their family just yet.

In an interview OK! last year Matthew said: “When we have a night with no sleep we go, ‘that’s it, no more!’

“But we recently said we can’t see this being the last baby in the house.”

Charley added: “I always have really tough pregnancies, that’s the only thing, but I don’t feel like I’m finished.

“I don’t know how many kids I want, but I think I’ll know when I’m done. I may not be able to have anymore, so who knows?

“I feel blessed with three healthy boys so sometimes I feel like it’s greedy to have another.”