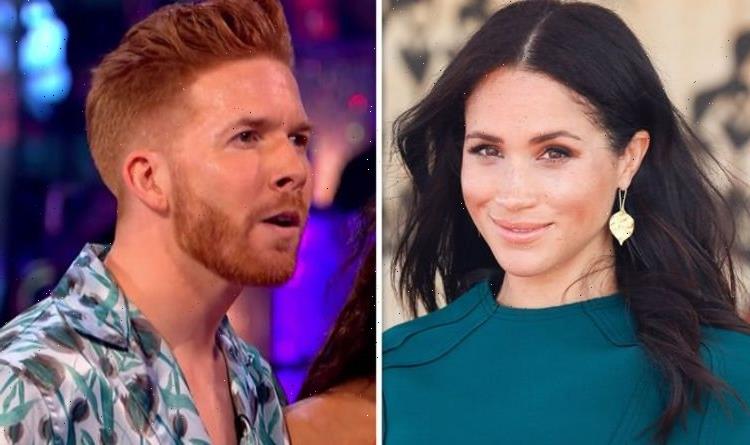 Neil Jones, 39, has said he would like to dance alongside Meghan Markle, saying he bears a striking resemblance to her ginger husband Prince Harry. The ballroom dancer claimed the Duchess Of Sussex would be great “fun” to light up the ballroom dance floor with.

Opening up on his dream celebrity partner, Neil said “Meghan Markle, cause I could be like Prince Harry.

Previously Neil partnered up with football pundit Alex Scott during the 2019 series of the show.

They’ve formed a close friendship after joining forces to compete in the competition.

Neil and Alex sent fans wild at the time as fans claimed the dance partners bore an incredibly striking resemblance to royals Prince Harry and Meghan.

The pair shared a cosy Instagram snap at the time and in the image caption thanked viewers for their support during their BBC stint.

However, social media followers focused their attention on the pair’s uncanny similarities to the Duke and Duchess of Sussex.

Neil – who is separated from wife Katya Jones – penned: “Our first #Ittakestwo together… but now it’s time to get straight back into the studio and work on @alexscott2 saying Chasse ready for her chacha.

And fans flooded the post insisting they were forced to do a double-take as they confused the pals for royals Harry and Meghan.

“I have been following the Sussex Royals and thought for a moment this was another shot of Meghan and Harry”, one wrote.

Another commented: “Had to do a double-take. I thought you were Harry and Megan in this photo.”

DONT MISS:
Amanda Holden stuns in tiny bikini amid sultry pool session (PHOTOS)
‘Time for me to have a long lie-in’ Carol Kirkwood on BBC future (NEWS)
Alex Jones reacts to TV ‘replacement’ amid last week on The One Show (LATEST)

However, Neil, who has appeared on Strictly since 2016, has shared how he “does not know” whether he will be dancing alongside a showbiz name this year.

The BBC dancer said he still “loves” working on the show regardless of his role in it, but would enjoy being paired up with a celebrity.

Speaking on if producers had hinted he would have a partner in the contest this year, Neil said: “We don’t know yet and it’d be nice, you know, either way, they know me, because I love working with the show.

“It’s one of these things. I always want to keep working with the show, as long as I enjoy it.

Neil has also co-created a new dance to celebrate public space in his neighbourhood, Wembley Park.

The #OlympicStep features 48 dance steps – in honour of the 48 steps that make up the Olympic Steps – Wembley Stadium’s elegant new entrance.

Neil said: “As someone who lives in Wembley Park, I get how exciting this new space is. I wanted to be a part of celebrating that and I wanted to do it in a way that meant anyone can get involved. That’s why Swoosh, Kieran and I created the #OlympicStep – a feel-good and easy way to celebrate the area’s legacy and champion the diversity that makes it so great.”