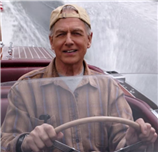 Let’s be clear right up front:

We have not seen the last of Leroy Jethro Gibbs.

Yes, as previously reported, Mark Harmon is stepping back from the role that made him uber famous over the past 18 seasons of NCIS, the nation’s top-rated scripted drama.

And, yes, the last time we saw this character… he was behind the wheel of a boat that blew up.

But producers didn’t even try to pretend.

They didn’t leave viewers hanging too precariously off a cliff, as viewers saw Gibbs alive and sort of well to conclude last season, waking up from this bomb and swimming away underwater.

What does this mean for his future?

And the future of the show in general?

For starters, Gibbs will remain front and center — at first.

“And what we left with was something that we felt left all possibilities open.

“We know he’s not dead right there, and we know he’s able to swim well enough…. All things are still possible with Gibbs.”

It sounds as if viewers won’t need to wait very long to see where things go with Gibbs, either.

“Gibbs has been hunting down this serial killer, and he’s doing it alone,” except for the assistance of investigate journalist Marcie Warren (played by Mork & Mindy alum/Harmon’s real-life wife, Pam Dawber).

“He’s cut off from his team… but in the beginning episodes, that’s going to change.”

Gibbs, of course, spent the bulk of late Season 18 suspended from NCIS (after assaulting a dog-killing POI).

And Harmon is only expected to appear in a handful of episodes next season.

“It’s going to be in the low single digit,” a source previously told TV Line in June, while another said the veteran actor will make only “a few” appearances throughout Season 19.

Long-time actorr Gary Cole in coming on board as a new agent, prompting many to wonder whether Harmon will even be around this time next year.

Binder said in this new interview that “a lot of things are reported on this show that aren’t necessarily true.”

“What we’re trying to focus on right now is telling the best stories we can with the characters we have — and Gibbs is a part of that world.

“And I think we’re doing a pretty good job with that.”

NCIS moves to Mondays and premieres on September 20 on CBS.