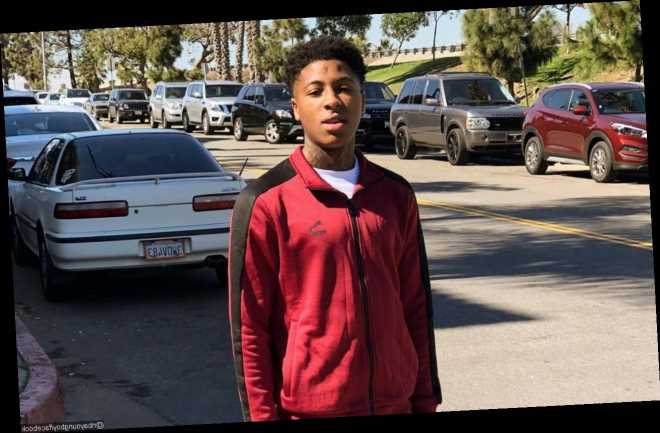 The ‘Valuable Pain’ spitter, who has been denied bond since his arrest in March, is grinning from ear-to-ear as he takes a group selfie with fellow inmates behind bars.

AceShowbiz -NBA YoungBoy a.k.a. YoungBoy Never Broke Again appears to remain in good spirits despite his arrest. The rapper, who has been incarcerated since being busted on an outstanding federal warrant last month, is all smiles in a new picture from jail.

In the image which surfaced on the Internet on Wednesday, April 7, the Baton Rogue native was seen donning an orange prison garb while being surrounded by fellow inmates. He grinned from ear-to-ear while posing for a group selfie with his new friends behind bars.

YoungBoy, whose real name is Kentrell DeSean Gaulden, has been arrested since his car was stopped by the LAPD and the FBI on March 22. The attempt to apprehend him resulted in a short pursuit as the rapper reportedly fled. Once the car stopped, the 21-year-old star reportedly got out of the car and ran on foot, until a K-9 unit sniffed and located him.

Cops allegedly found a firearm in Youngboy’s car, but it’s unclear whom the weapon belongs to.

It’s reported that his latest arrest is tied to his September 2020 arrest where he and 16 others were taken into custody on drug and firearm charges. His attorney maintains that his client wasn’t in the possession of weapons at the time of the 2020 arrest, but prosecutors are determined to build a case.

A request for his release on bond has been denied as he violated his bond conditions when he skipped out on a drug test that was mandated by law. According to documents, he didn’t show up for his last appointment in January. He said that missed it because he was receiving dental work, but he hasn’t rescheduled.

His other conditions that he had to abide by were “daily curfew calls, random drug screenings, and monthly office visits.” The “Outside Today” MC is set to return to court later this month and it’s said that his attorney will ask for the bond conditions to be removed during the upcoming hearing.