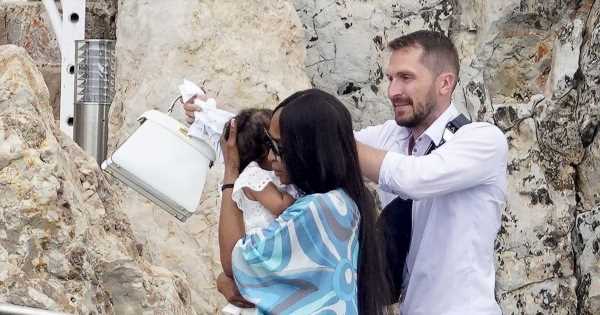 Naomi Campbell has been spotted tenderly carrying her baby daughter while out in Cannes in the south of France on Monday.

The 52 year old supermodel and mum-of-one dressed in a chic blue patterned maxi dress and trainers as she lovingly held on to her daughter, who's name the star has opted to keep private.

Model Naomi's long dark brown hair cascaded down her back in a slick, straight hairstyle.

She added a pair of sunglasses to shield her eyes from the sun, which had a silver frame and black lens.

Doting mum Naomi, who recently shared a rare snap of her daughter watching her at the Met Gala, tenderly held her one year old daughter close to her chest as she arrived at the five star Hotel du Cap Eden-Roc hotel.

Naomi's adorable daughter was dressed in a white, sleeveless all-in-one playsuit with shorts and a pair of tiny matching white shots.

The model shaded her tot's head from the sun with a white muslin cloth.

She was assisted by a man, who held onto Naomi's white handbag as she walked through the hotel grounds.

Naomi recently celebrated her birthday in Cannes on Sunday 22 May.

The birthday girl dressed in a chic white, long shirt dress and cinched in her waist with a black belt, which she matched with her monochrome Nike trainers, black handbag and sunglasses.

It comes after Naomi opened up about her baby daughter in a candid interview with Vogue magazine.

"She wasn't adopted – she's my child," Streatham-born Naomi told the fashion bible, adding that only a few people knew she was planning for motherhood.

"I can count on one hand the number of people who knew that I was having her. But she is the biggest blessing I could ever imagine. It's the best thing I've ever done," she said.

Naomi announced she had become a mum at age 50 in May 2021 as she shared the first photo of her "beautiful little blessing" on her Instagram page.

Naomi shared a beautiful picture of her baby daughter’s tiny feet resting in her hand and wrote: “A beautiful little blessing has chosen me to be her mother, So honoured to have this gentle soul in my life there are no words to describe the lifelong bond that I now share with you my angel. There is no greater love.”

For all the latest celebrity gossip, sign up to our daily newsletter here.