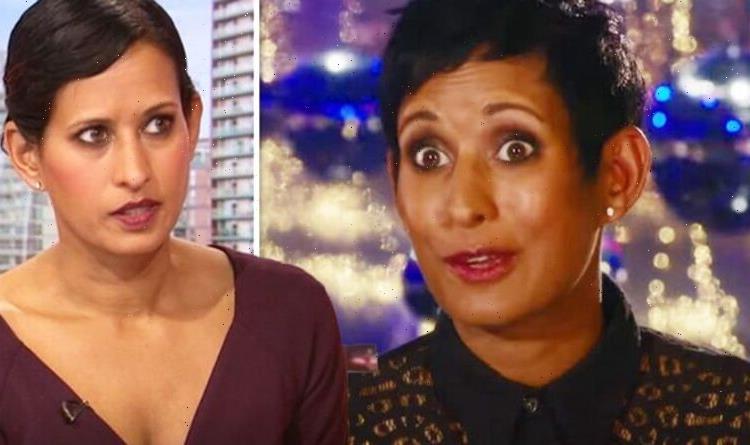 BBC Breakfast presenter Naga Munchetty has taken to Twitter to hit back at a disgruntled viewer for aiming criticism at her this morning. Naga, 47, responded to the hateful remark on her day off, as her BBC colleague Victoria Derbyshire filled in for her on the news programme earlier.

Maybe you should turn off your default setting of hate instead?

In view of her 267,000 followers, Naga, who usually fronts BBC Breakfast on Thursdays, Fridays, and on weekend days with Charlie Stayt, didn’t hesitate to address the post from the troll.

“Maybe you should turn off your default setting of hate instead?

“Have a lovely day. X” she ended her comment.

Naga was responding to a critical post about her interview skills written by Sally Wickens, who uses Twitter handle @nedneds.

They wrote: “Just had to turn @TVNaga01 off again ,interviewing Grant shappes, then starts the normal childish na,na,na,na let’s blame you ,so tiresome.” (sic)

Following Naga’s comment, the newsreader’s followers were quick to rush to the comments to defend her and address her absence from the show this morning.

@sootydeposits commented: “What an elegant takedown,” alongside a flexed bicep emoji.

@JasonGiller added: “Not that you need it Naga, but good vibes only for you,” they penned alongside a GIF of Ariana Grande doing a mic drop.

“Glad you’re still holding them to account even when you’re having a lie in,” quipped @groovy_chi cheekily.

Victoria Derbyshire stood in for Naga as she took time away from the BBC show today.

Some BBC Breakfast viewers were left taken aback when they didn’t see Naga on the famous red sofa this morning, to complete her regular Friday hosting duties.

The star’s post comes days after she voiced her disapproval that “ungrateful c**” was trending on Twitter following Nazanin Zaghari-Ratcliffe’s comments about the UK Foreign Office.

Speaking at a press conference on Monday, Nazanin thanked those who had helped secure her release, but criticised the Foreign Office for taking too long.

Following the press conference, “ungrateful c**” trended on Twitter as cruel users thought Nazanin, whose daughter was one when she was detained, should have shown more gratitude.

Naga, who has been following coverage of Nazanin’s release, shared her disbelief that the phrase was being used.

Lost for words, Naga simply wrote: “Wow,” while posting a screenshot which had “#ungratefulcow” at the top.

BBC Breakfast airs weekdays at 6.30am on BBC One.