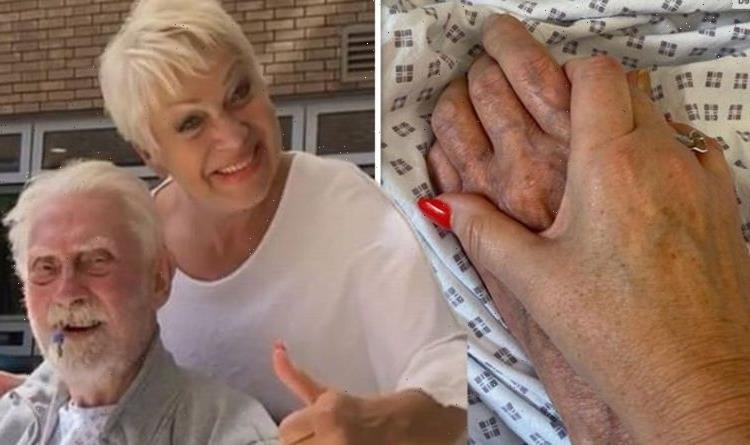 Loose Women: Denise Welch emotional over her dad in May

Hollyoaks actress and Loose Women presenter Denise Welch, 63, has taken to Instagram to mourn the death of her dad Vin Welch. Denise said she is “grief striken” after Vin died in hospital following major surgeries and battling health issues.

The star said she was dreading the loss of her dad in an emotional post, shared in view of her 282,000 followers.

Vin’s tragic death comes after he made a “miraculous recovery recently from major surgeries”, according to Denise.

Denise shared a photo of herself clutching onto her dad’s hand from his hospital bed.

She penned alongside the moving image: “The words I’ve dreaded saying all of my life.

“Last night at 11pm, we lost our dad, the life force that was Vin Welch. After making a miraculous recovery recently from major surgeries, pneumonia plus his existing pulmonary fibrosis was more than even he could take.

“He left us surrounded by his family who could not have loved anyone more.

“I can’t quite function as I’m so grief stricken, but I know he meant so much to so many people, even those who’d never met him.

“I’ve never seen anyone fight to stay longer at a party than dad and last night was no different.

“He loved life and lived it to the full like no other.

“The nurses in Ward 6 at Durham University hospital will forever be in our hearts as they gave dad the most peaceful passing anyone could wish for.

“They adored him and he them. Heather, Helen, Lauren, Naz, Chloe, Graham, Debs to name but a few. We will NEVER forget you.

Denise’s celebrity friends took to the comments section to send her their love following the heartbreaking news.

Her Loose Women co-star Ruth Langsford commented: “So, so sorry Denise….he was a one off and there’s going to be one hell of a party in heaven.

“I know your heart is breaking but grief is the price we pay for love. You will carry him with you always. RIP Vin.”

Carol Vorderman penned: “Oh Densy I’m so so so sorry.”

Denise previously opened up on her father’s condition while marking her 63rd birthday, which was “bittersweet”, as she spent the day by Vin’s hospital bedside.

The actress said she had been with her dad Vin on Saturday, which was also the anniversary of her mum Annie’s death.

Denise’s dad underwent gallbladder removal surgery, which had caused him some problems.

Denise wrote: “So today I’m 63. But although things are tough at the minute I feel physically and mentally stronger than I have for years.”

She added: “I’ve never been so busy work wise, I’m looking after myself, exercising regularly and have been 20 months without a visit from ‘the unwelcome visitor’, the longest in 32 yrs without a major depressive episode. I don’t know what the reason is to be honest but I’m just very grateful.

“But of course today May 22nd is also the anniversary of my mum Annie’s death so it’s always bittersweet.

“I miss her every day and would love her to have lived to have seen how my sobriety has changed my life and the lives of those who love me.”

Denise added: “I also wish she’d known Lincoln and known that he would look after me and keep me safe. Debbie and I are so lucky to have the parents we have had.”

Giving an update on her dad’s hospitalisation, Denise wrote: “To those asking after our dad, the legend that is Vin Welch, thank you.

“After months of no appetite and extreme weight loss, he has had complications after very difficult gallbladder removal surgery and has been very poorly indeed. But he is the most amazing man and is slowly making his comeback.

“I’m spending my birthday today with him in hospital and will tell him about all the love for him that has poured in.

“He’s had postoperative delirium which I’d never heard of before and is more common than I thought and I’m looking further into. It’s been a tough few weeks for my family but I’m grateful for them all.”

Denise concluded: “I must also today send so much love to the families and friends of those who lost their lives in the Manchester arena bombing 4 yrs ago today and those who are still living with the mental scars.”