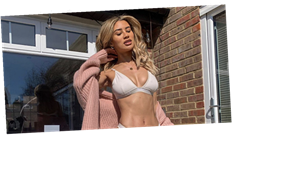 After Montana Brown was pictured enjoying some quality time with a male companion in Barbados, the man in question has been revealed to be real-estate executive turned rugby player Mark O'Connor.

The Love Island star, who bravely opened up about having Botox for excessive sweating, is reportedly dating Mark and the pair are thought to have met at his gym.

A source told Mail Online: "He played rugby for Chiswick and Wales 1st Teams as a prop, and has a proprietary interest in Forge Gym London. That's likely how he met Montana.

"He used to be out of shape and is now very much in shape. He's a very wild bloke to go on a night out with, drinks a lot. Very good fun to be with.

"His father owns a huge development/construction firm which he will inherit," the insider divulged.

The 25-year-old previously spoke about a potential new love interest back in June 2020 while speaking to Joanna Chimonides on FUBAR Radio.

"He lives like quite far from me and where we're going is not near me either. He's like, 'No, I'm gonna come pick you up, I'm gonna swing by, pick you up. Do you have any allergies? Because I'm gonna grab some food on the way for our walk.'

Montana split with ex-boyfriend Elliott Reeder in January 2020 after two years of dating.

In an honest chat on her YouTube channel, she explained: "I've been on the pill since I was about 15. I'm sometimes just a bit bad with taking it.

"To be fair, I'm now very particular with my pill because I got pregnant on the pill, last year.

"It was so bad. I was shocked because I was like 'no, surely not!' and I remember I found out…

Montana, who confessed to never wearing deodorant, continued: "It really was awful.

"To be fair it wasn't that awful, because I naturally miscarried, but I was actually on the pill when it happened and I was confused," she expressed.

OK! Online have reached out to Montana's represenatatives for a comment.