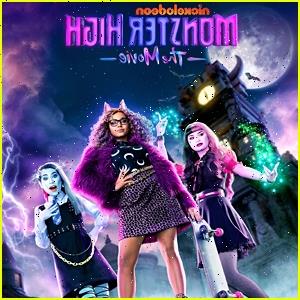 Monster High is getting the movie musical treatment!

The trailer for the upcoming Monster High: The Movie, based on the popular Mattel toys/franchise, has been released, coming to Nickelodeon and Paramount+ later this year.

Find out more and watch the trailer inside…

Monster High: The Movie follows Clawdeen Wolf (Miia Harris), who was born half human and half werewolf, after she arrives at her new school, Monster High. She quickly makes friends with her classmates Frankie Stein (Ceci Balagot) and Draculaura (Nayah Damasen), and for the first time in her life, Clawdeen feels like she has finally found a place where she fits in and can truly be herself, despite keeping her human half a secret. When a devious plan to destroy Monster High threatens to reveal her real identity, Clawdeen must learn to embrace her true monster heart and find a way to save the day alongside her new friends.

Even more characters from the Monster High universe will also be seen throughout the movie.

Not only is the live-action movie musical coming out, but a new animated series is also coming to Nickelodeon this year.

Monster High: The Movie premieres on Thursday, October 6th at 7pm ET/PT on Nickelodeon, and streaming that same day on Paramount+!