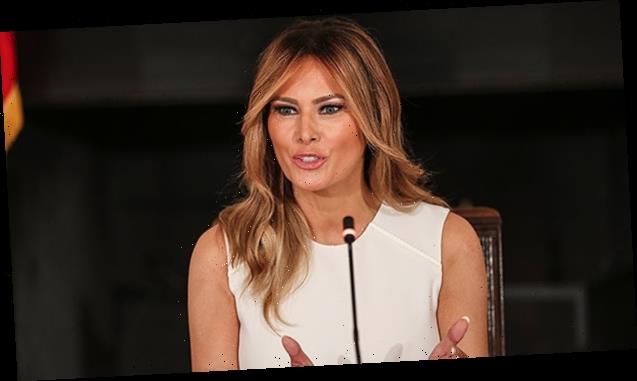 Christmas décor at the White House is one of the many honors First Ladies have — but it apparently wasn’t a top priority for Melania Trump, 50. The FLOTUS can be heard ranting about the decorations in a newly released phone call with her former best friend Stephanie Winston Wolkoff. “I’m working like a — my a– off at Christmas stuff, who gives a f— about Christmas stuff and decorations,” she says. The call was one of many taped recordings made by Stephanie and released on CNN’s Anderson Cooper 360. Notably, Stephanie recently released the book Melania and Me.

“But I need to do it, right? Correct?” she said, going on to vent about people saying she’s “complicit” with her husband, President Donald Trump, 74. “They say I’m complicit. I’m the same like him. I support him. I don’t say enough. I don’t do enough,” she complained. In another call, she acknowledged that she was aware many “could not stand” her husband. “I don’t give a f—. It’s true, it’s true. Honestly, it’s like — I’m doing the same stuff that I did before. They cannot stand him,” she said.

Melania’s Chief of Staff, Stephanie Grisham, issued a statement about the tapes released by Stephanie. “Her only intent was to secretly tape the First Lady in order to peddle herself and her salacious book. There is no way to know if these recordings have been edited and it’s clear the clips were hand-picked and presented with no context. The First Lady remains focused on her family and serving our country,” Stephanie said via email to HollywoodLife.

In 2019, The White House released a video of Melania walking through the decked halls of the historic building. “The Spirit of America” was the theme of the white and green décor, serving as a tribute to Americans who have shaped the country, both past and present. Details included a Gold Star Christmas tree honoring military families, various gingerbread houses and an ornament designed by the First Family.

Melania released a statement at the time about her inspiration for the decorations. “This Christmas season I want to honor those who have shaped our country and made it the place we are proud to call home,” she said. “When I travel the country, I am inspired by the hard working people and families that I meet. No matter which state they call home, many Americans share a strong set of values and deep appreciation for the traditions and history of our great nation. Thank you to all of the staff and volunteers who worked to make sure the People’s House was ready for Christmas. Wishing everyone a very Merry Christmas and Happy New Year,” the statement also read.