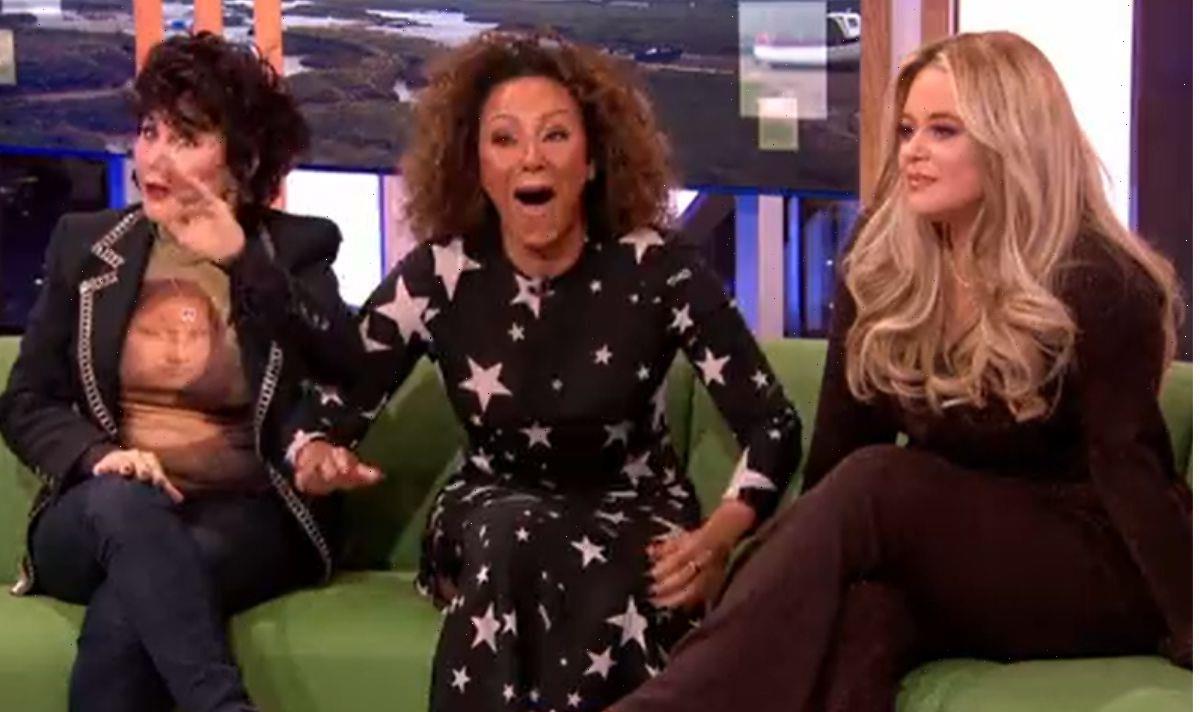 The One Show: Mel B tries to walk off after interview

Mel B filmed a jaw-dropping travel show this year with Ruby Wax and Emily Atack, and she nearly stormed out of the trio’s TV interview after Ruby exposed her for mistaking a railroad track for a stream. As Scary Spice turned her back on her co-star, she placed a hand on her bottom and announced she was wearing no pants.

Mel, 47, had been reliving her experiences filming the travelogue series Trailblazers with the other two when the embarrassing mishap took place.

“I adore [these two] to bits but they’re mental and they don’t stop and I ended up being the normal one!” Mel told Ronan Keating on Thursday’s episode of The One Show.

However, Girls on Top actress Ruby wasn’t about to let her comment go, hitting back with her own experience of hanging with Mel in the USA’s Rocky Mountains.

“I have footage of her being normal! At midnight [she said] ‘C’mon, let’s go swimming in the stream,'” she hit back.

Mel then rose to her feet and pretended she was storming out of the studio in a huff.

Yet as she stood up and turned her back to Ruby, the actress jokingly stroked her bottom, quipping: “There’s no underpants here!”

“I don’t wear underpants!” Mel retorted, before cringing in embarrassment, as the other girls yelled: “She’s got no knickers on!”

The eventful filming stint, which saw Mel adamant that she never wanted to ride a horse again, was on the theme of an 1874 travel book, A Lady’s Life in the Rocky Mountains, by Isabella Bird.

The pioneering explorer travelled 800 miles across the Rockies, encountering bandits and grizzly bears, before later falling ill during a trip to Morocco, where she died.

Mel and the two other leading ladies had resolved to follow in her early footsteps as explorers, although Ruby teasingly quipped that her co-star “hadn’t even read the book” before setting off on their journey.

Although the pair stayed in some luxurious hotels, they also got back to basics and indulged in the simple life, with Emily proudly bragging that she’d even caught a fish.

The sometimes gruelling lifestyle might not have been what the world would expect from a trio of glamorous celebrities, but they demonstrated that they were game for trying it out.

Emily had written a teaser caption on Instagram just before the pair set off, announcing: “Next month, I’m going to be travelling the Rocky Mountains with the icons that are Mel B and Ruby Wax, retracing the steps of Isabella Bird, one of the world’s first female explorers in the 19th century.

“Ruby thinks I’m gonna run off with a cowboy. Honestly the most mental caption I’ve ever written.”

While Mel drank wine and formed “bonds” with the other girls, she also had a trauma after time spent in Wyoming.

One of her Instagram posts was captioned: “Noooo way!!!!! I’m not getting on that friggin horse again!!! Count me oouuuutttt.” (sic)

Ruby told the world that Isabella was her “heroine”, revealing to the Yorkshire Post: “We were (on a journey) seeing what a woman could do more than 100 years ago, wearing nothing, sleeping in the snow and being so brave.

Mel agreed that she was a “forgotten hero” and demanded to know why Isabelle was not in the history books.

“I’ve never heard of her… why are all these women not being praised and celebrated?” she exclaimed.

The three-part series Trailblazers: A Rocky Mountain Road Trip airs its first episode at 9pm on November 28 on BBC Two.