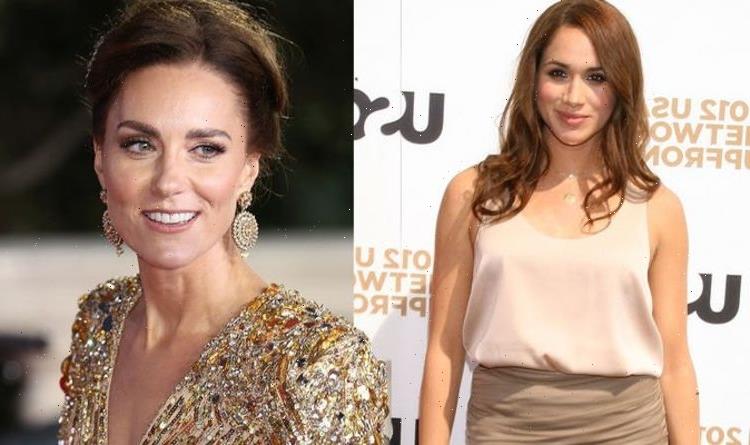 Lady Colin Campbell, 71, has addressed social media’s claims that Meghan Markle has inspired Kate Middleton’s choice of outfits as of late. The rumour mill went into overdrive after the Duchess Of Cambridge wowed in a gold sequin Jenny Packham gown at the premiere for the latest James Bond movie, No Time To Die.

On Twitter, some users commented on how they felt Kate, 39, was “copying” her sister-in-law’s Hollywood A list style.

Former Suits actress Meghan, 40, often leaves royal enthusiasts dazzled with her choice of designer frocks, while Kate, 39, frequently opts for a more formal approach when it comes to official engagements.

Now, former I’m A Celebrity… Get Me Out Of Here! star, Lady Colin Campbell, has waded in following claims that Kate has started taking inspiration from Prince Harry’s wife.

Last week, the Duke and Duchess of Cambridge appeared alongside Prince Charles and the Duchess of Cornwall on the red carpet for the James Bond premiere.

Kate wore a show-stopping gold gown by Jenny, a known favourite to the Royal Family.

However, critics of the Cambridge’s claimed that the Duchess had been copying Meghan, but this has not sat well with Lady C.

The aristocrat said in her latest YouTube video: “I think that would be the compliment that elegance paid to inelegance, I don’t think elegance is going to emulate inelegance.

“It just shows how delusional Meghan’s followers are, first of all, Catherine’s style is completely different from Meghan’s – always has been and always will be.”

The mother-of-two added: “Catherine is invariably appropriate, now I know the rules of the royal and aristocratic world and who abides by them and who doesn’t.

“Not everybody may know all the new answers but I do and I’m here to tell you, Catherine doesn’t need to emulate Meghan in any way, shape or form.”

Jamaican-born Lady C claimed: “The idea that she would do is beyond preposterous, you only need to look at the way the two women dress to see that one is the picture of elegance, conservatism, always conserved and always tasteful, always modest, despite also making sure she is also striking, she also abides by the royal rule of dressing in colours that will make you stand out from the crowd.

The Duchess of Cambridge looked mesmerising on the red carpet at the No Time To Die premiere in an altered £3,893 dress.

Fashion retailer, Karen Millen, has revealed that the gorgeous dress caused a humongous 3,043 per cent increase in searches for “Kate Middleton Gold Dress”.

Also, out of the 2,000 social media reactions on Facebook, 92 per cent of them were complimentary, showing that royal fans all over the world were obsessed with her dress.

Kate also opted for no clutch bag and low-key jewellery to accessorise her outfit, allowing the gown to speak for itself and wow everyone.

There are some Karen Millen dupes of Kate’s dress which royal fans can buy.

For instance, a Gold Sequin Wrap Jersey Dress is currently on sale for £28, and some Gold Plated Twist Drop Earrings, similar to those worn by the Duchess are also on sale for just £12.

Demand for dupes of the royal’s gold sequin dress from Pretty Little Thing also spiked by 550 per cent in a matter of hours.

The brand revealed Kate’s appearance at the UK premiere caused a 300 per cent spike in demand for gold dresses from their site, while demand for similar gold sequin dresses has skyrocketed by the aforementioned number.

The royal wore a gold-sequined cape gown, featuring one of this season’s hottest trends, a sheer-effect overlay.