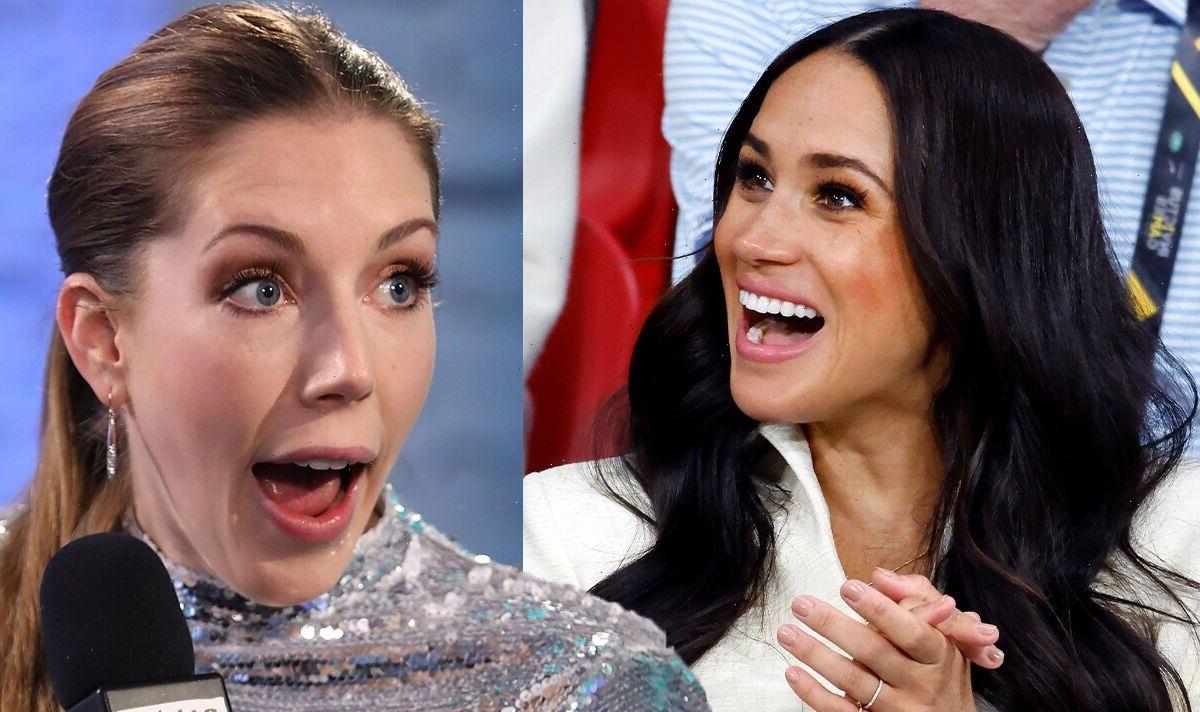 Meghan Markle, 40, has split opinions since she married Prince Harry in 2018, with some criticism happening when the couple stepped back as senior members. Katherine Ryan has spoken exclusively to Express.co.uk about her opinion on Meghan and what she believes is at the root of the negative criticism Meghan receives.

You’re under the microscope.

Katherine takes a lot of time to make sure feminism is a large part of her career as a comedian and opportunities are given to others in her field.

She has previously praised Meghan for being so open about her miscarriage during the Oprah Winfrey interview, having suffered from one herself the year before.

Express.co.uk asked Katherine why she thinks Meghan is so heavily criticised and whether it had anything to do with her position as a woman.

She revealed: “I think when you join such an infamous family, then you’re under the microscope.

“I think that anyone, certainly any woman who deviates from what is expected of them is going to face criticism.

“So I certainly think that I love Meghan Markle’s voice and her confidence to challenge the norm and what’s expected of her in that role.”

Katherine then tried to get to the catalyst of Meghan’s hatred but struggled to find a pinpoint.

She continued: “Equally anytime that you challenge an idea people are going to come after you.

“So, I mean I’m not exactly sure what makes her such a target, but I think it’s her confidence in challenging the shape of what a woman in that role should like, which is someone who wears stockings.

“Someone who covers their shoulders, someone who follows the rules.

“I feel like I would find it very challenging being real because many of us couldn’t fit into those constraints very easily.

“It would feel like a real infringement on your sense of personal freedom.”

She concluded: “So, I don’t understand why people feel so aggravated by that, I think it’s a great challenge and things evolve.”

Katherine is currently recovering from Covid after contracting the virus in lockdown and has partnered with Gousto to help regain her taste and smell.

Katherine said: “My husband noticed first that we couldn’t smell and I thought he was wrong.

“I ran around collecting different things in the house to prove him wrong, but I couldn’t smell anything.

“I hadn’t realised because I could still taste but on reflection, the whole flavour experience when losing smell is really different.”

Katherine then spoke about the “impact” Gousto has had on her and her family, especially in lockdown.

She said: “I mean, it has had such an impact on my family’s mealtime and cooking and really enhanced our flavours.

“I know a lot of people feel quite sad and powerless about losing their smell and taste.

“And that’s not what you know as a comedian. I always want to bring joy and variety to people’s lives.”

Katherine has teamed up with recipe box Gousto to launch limited-edition ‘Flavour Saviour’ kits, designed with AbScent to help re-train lost sense of smell and bring back the joy of flavour. Visit flavour-saviour.co.uk from March 14 to order a free kit