Megan Thee Stallion rocked a purple bustier and sexy fishnet tights onstage for day one of the annual Made in America Festival in Philadelphia this weekend.

Megan Thee Stallion ushered in the first day of the Made in America Festival in style on Saturday. The “Savage” rapper, real name Megan Pete, 26, hit the stage in at Benjamin Franklin Parkway in Philadelphia in a sequin purple lamé bustier and fishnet tights in black as she performed some of her biggest hits for the crowd. She finished the look with a matching baker boy hat with the same sequin detailing and colors. 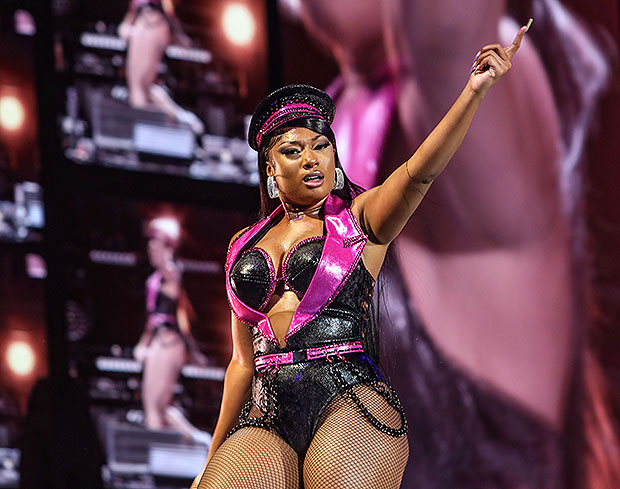 Made in America, founded by rapper and producer JAY-Z, celebrates its 10th anniversary this year. Justin Bieber and Lil Baby headline the two-day festival this weekend among a slew of other notable performers, including Doja Cat, Tinashe, Roddy Ricch, and A$AP Ferg. On Instagram, Megan offered a closer look at her look (below), which included glam hoop earrings and formidable nails in purple.

Fresh off her performance on the Made in America stage, Megan is headed next to BottleRock, Napa Valley’s annual music festival that also takes place this Labor Day weekend. BottleRock began on Friday, Sept. 3 with headliner Stevie Nicks and performances by Brandi Carlile, Finneas, and Maren Morris, among others. Megan will perform on the final day on Sunday headlined by Foo Fighters with performances by Black Pumas, Jon Batiste, and Jack Harlow, among others.

The busy festival circuit comes after Megan graced the September/October issue of Essence magazine, teasing details about her upcoming sophomore album. A follow up to Good News released in 2020, the Grammy winner called the upcoming project a return to her old self. “I feel like [my new album] will be aggressive,” the “WAP” rapper teased. “I feel like this project is definitely something very well thought out.”

“This project is me talking my sh*t, getting back comfortable with myself, getting back to the Megan that was on the come-up,” Megan continued, later adding, “Every time I make a move, I’m like, ‘Okay, how can we be better than Megan last month? How can we be better than Megan last year?’” The Megan of this year has already had a successful run: she’s among the leading artists of this year’s nominees for the MTV Video Music Awards, set to air September 12, garnering six nominations overall, including Artist of the Year.