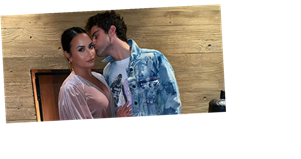 If you thought Max Ehrich and Demi Lovato’s breakup was going to be amicable—think again. Rumors of their split started circulating earlier this week and now it’s official: They’re over. After just five months of dating, a super quick engagement, and a mysterious split, Max is spilling on the circumstances of the breakup.

“Imagine finding out about the status of your relationship through a tabloid,” he wrote in a now deleted Instagram Story. “While your in the middle of filming a biopic movie about a Pastor in a Christian Church whose intention of the film is to help people,” he added, before sharing a third a third post that said, “God bless.”

Whew… let’s dissect that. People and E! News were the first to report that Demi and Max called off their engagement amid rumors of tension. “It was a tough decision, but Demi and Max have decided to go their separate ways to focus on their respective careers,” People‘s source said. “They have respect and love for one another and will always cherish the time they spent together.”

Respect might not be the right word to use since Max decided to spill all of their dirty deets on social media. Despite his claims, another People source says that “Demi made Max aware that the relationship was over and it was going to come out in the press.”

Well, despite the conflicting claims, the internet seems to be siding with Demi on this one.

Did this pastor also happen to conveniently emotionally manipulated and trap someone who’s vulnerable and make them lose faith in love all over again because they used that person to further their career? I wonder, Max Ehrich. pic.twitter.com/OxKDYteqyl

Max Ehrich is a big liar and attention seeker, he’s just obsessed with the FAME, I’m so thankful that Demi break up with him.

Demi’s already deleted all of their photos from her Instagram account, which makes sense considering what source told E! News. “There were many red flags she was ignoring and trying to turn a blind eye to,” an insider said, while another added “she doesn’t trust him and thinks he’s sketchy” and “feels [Max] proposed to get attention.”

His recent actions definitely reek of attention-seeking behavior, so IMHO, Demi’s better off without him.