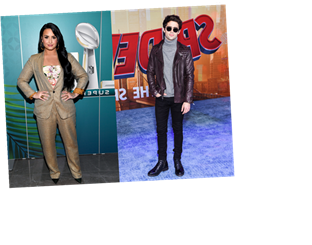 Warning: Majorly cringe-worthy content ahead. Max Ehrich reportedly wrote a song about Demi Lovato. Per a source who reportedly spoke to TMZ on Oct. 13, Ehrich apparently has a new song "all about his relationship with Demi" coming out on Oct. 16. And it’s apparently not in the same vein as Still Have Me, the breakup anthem Lovato recently released.

Instead, Ehrich’s new song is reportedly all about falling in love, presumably with Lovato. TMZ reported, "the tune is about the night he met Demi, and it tells the story of his inner dialogue — being terrified of falling in love with her because he knew their relationship was the real deal." As if that wasn’t painful enough to read, the source reportedly added to TMZ that the song apparently "also touches on him falling for Demi right off the bat, and he sings about how he couldn’t sleep because he knew he wanted to be with her forever." (Elite Daily reached out to Ehrich’s reps for comment, but did not hear back in time for publication.)

The reported song is the latest in a long line of extremely awkward post-breakup behavior on Ehrich’s part, which includes him publicly claiming he only heard about the split through tabloids, comparing himself and Lovato to Pete Davidson and Ariana Grande, and being filmed crying and praying on the beach where he first proposed to Lovato. Lovato is reportedly not here for the messiness. "She is having all sorts of issues with Max not leaving her alone," a source reportedly told E! News on Oct. 12, a day after TMZ released the footage of Ehrich sulking at the site of their engagement. "He has been trying to get in contact with her family and friends and they have all blocked him. She’s in contact with lawyers now on what to do."

So, uh, yeah. I think it’s safe to say the two are operating on extremely different wavelengths. Joke’s aside, I really do help Ehrich gets the help he needs in moving on from the split. Breakups are never easy, and I can only imagine how they’d be especially difficult under the scrutiny of the public eye.