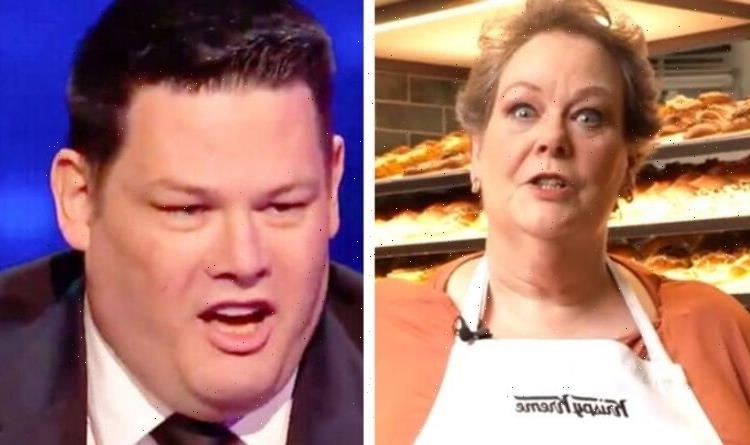 The Chase: Mark Labbett punches set as he storms off

The Chase star Mark Labbett caught sight of Anne Hegerty on Twitter, seizing the opportunity to combine her quiz show host mindset with a new Krispy Kreme doughnuts campaign. It seemed the tantalising prospect of bagging a free edible treat in return for cracking a code may have had Mark’s mouth watering, according to his feedback on the post.

Go get those delicious doughnuts!

Anne released a video of herself on Twitter this afternoon in view of over 160,000 followers to confirm the partnership.

“My name is Anne Hegerty,” she announced, “also known as the Queen of Quizzes.

“I’m on a mission with Krispy Kreme to bring joy to the nation with its latest campaign #KryptoGrams.

“Over the next two weeks, look out for a clue on my Twitter and across Krispy Kreme’s social channels for the chance to bag a free original glazed doughnut for anyone that cracks the code.

“Simply head to your nearest Krispy Kreme retail shop and say: ‘I’d like an original glazed doughnut’ and then give the answer to one of the lovely Krispy Kremers!”

“Here’s a little tip to get you thinking – the first clue will be related to World Book Day.

“Good luck and go get those delicious doughnuts!”

The ITV quizzer promised more clues would be coming soon for fans who stayed tuned.

Her co-host Mark was one of the first to react to the news, as he joked: “I am so so so so so jealous right now :).”

However, one Twitter user, G Jones, was quick to jump in and offer some words of encouragement for the star.

“Nah, you’re not really jealous@MarkLabbett! Think of the hard work you’ve put in to lose weight and how better you’re feeling for doing so well.”

They added: “Just don’t go from shop to shop with the answer to the codebreaker questions.”

Mark’s weight loss journey has taken him from 29 stone at his heaviest, when he wore size 5XL in clothing, down to a trimmer size 2XL – and he proudly revealed on Loose Women last year that his diet regime and exercise plan over lockdown would soon have him wearing XL.

Elsewhere on the post, @astro_emmy retorted: “I got panicking for a second thinking it was cryptocurrency.”

Anne replied: “No no, it is all very innocent and doughnut-related.”

Anne joked back: “I did get some freebies, but I et em.”(sic)

Anne’s doughnut promotion campaign is just the latest in a series of TV appearances.

The quizzer, otherwise known as The Governess, has been a firm favourite on the ITV show for the past 12 years.

The former journalist also appeared on I’m A Celebrity… Get Me Out Of Here! back in 2018.

The Chase airs weekdays on ITV at 5pm.