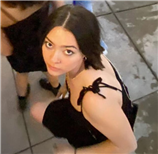 She doesn’t care about her trolls.

And she absolutely, positively does not care what her parents think.

Can anyone blame her, either, after all this 20-year old has gone though?

The ex-reality star, who had to live under the same roof as Kate and Jon Gosselin over the formative years of her childhood, is now a college student.

And she’s making the most of her freedom!

Earlier this month, Mady shared footage of herself and her friends, out and about and having a great time.

She’s wearing a black minidress in the video and enjoying the sort of freedom that was never really afforded to her as a kid.

“I cannot get this song out of my head,” Gosselin captioned her TikTok post on Monday, September 27.

In the clip, the retired TLC personality is performing choreography in her college dorm at Syracuse University to “Words, Words, Words” by Bo Burnham.

“Met a girl named Macy, had sex with her all day,” reads lyrics to the section of the song Mady is moving and grooving along to, as she uses her hands to jokingly pump up and down in a rather racy manner.

The song continues: “But she was dyslexic, so I. ended up doin’ the YMCA.”

The silly dance routine is refreshing to see.

It comes after years (and years!) of drama between her divorced parents, Jon and Kate, including a years-long custody battle over Mady, her twin Cara Gosselin, and the former couple’s sextuplets:

This isn’t a healthy situation for anyone involved.

We’re just glad to see Mady off at college and having fun on her own for a change.

In recent response to dumb strangers on the Internet calling her out for uploading photos of herself in scantily-clad outfiits, Mady shot back this summer:

“Everything women do is sexualized, so I’m going to do/post whatever I want : ) I appreciate you looking out for me though.”

Elsewhere, Mady also admitted that she sometimes receives death threats — because people on social media can suck and so can her parents.

Previously, on a Kate Plus 8 confessional, Mady spoke candidly about leaving for school… and leaving her scandal-filled life behind.

“College feels like a place to blend in. I feel like we haven’t really had much of a chance to really, really blend in. I want to be just like somebody,” she said on air.

“I don’t want everyone to know my name and my business. So, I feel like a big college is the way we want to go.”