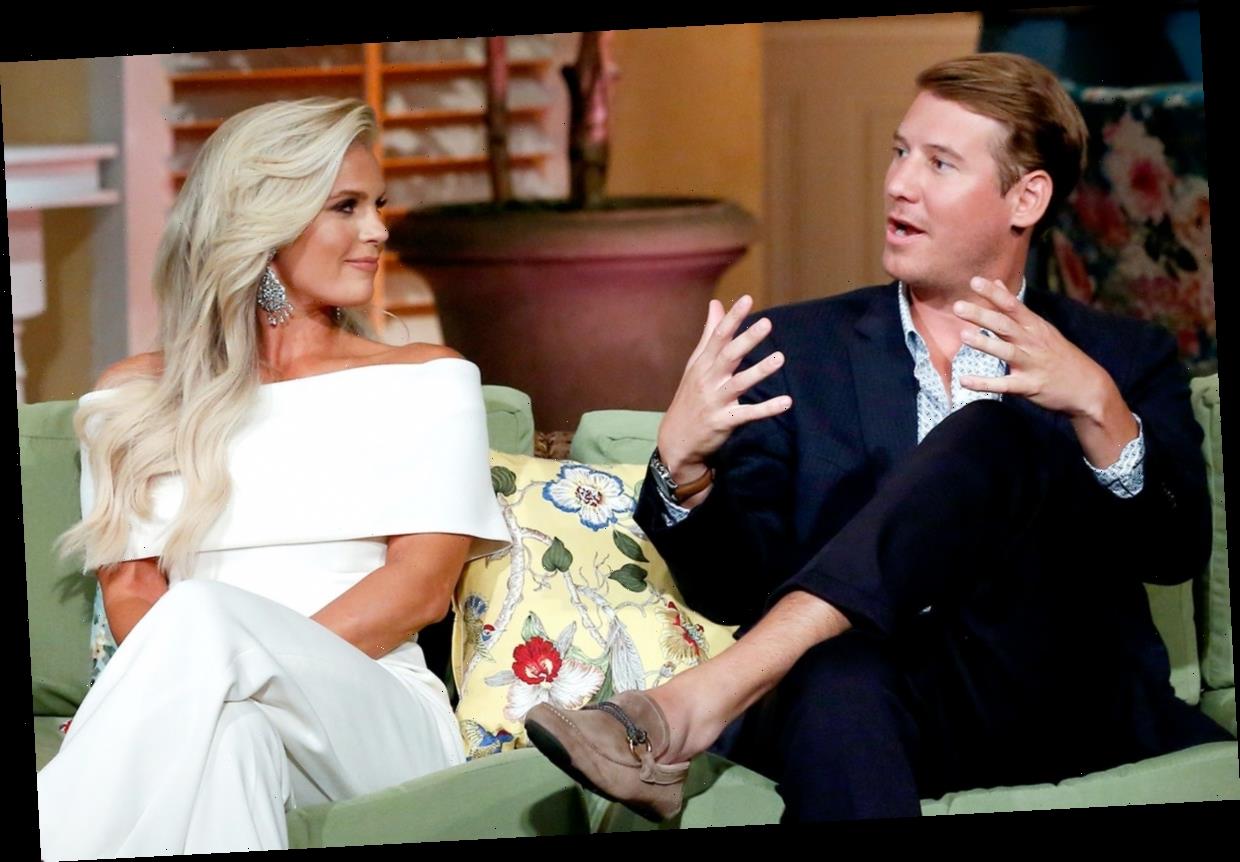 If you’re looking for drama, then look no further than Bravo’s Southern Charm. Even since its debut in 2014, the Charleston, South Carolina-based reality show has offered endless entertainment and scandal, but few relationships on the show are quite as contentious as the one between Austen Kroll and Madison LeCroy. Seasons 6 and 7 of the series followed the on-and-off-again romance between the two, and if you’re completely lost by Madison LeCroy and Austen Kroll’s relationship timeline, don’t sweat it — you def aren’t the only one.

Their romance first began back in 2018, and initially, the hairdresser and the reality star seemed like a great fit… that is, until Episode 3 of Season 6. Over the course of their three-year relationship, the exes broke up and got back together at least twice (that fans know of, anyway), but their most recent split — which they announced in December 2020 — seems like the final straw for them. Since then, the exes have found themselves in a tangled web with fellow reality stars Kristin Cavallari and Jay Cutler, and LeCroy even sparked rumors of an affair with Alex Rodriguez. (Like I said: drama!) Here’s everything I know about LeCroy and Kroll’s exhausting dating history.

Ahead of the Season 6 premiere of Southern Charm in May 2019, Kroll explained how he first met LeCroy in a video for Bravo. According to him, they first crossed paths in January 2018 when he went out to dinner with his Southern Charm co-star Naomie Olindo and she brought her long-time pal LeCroy along. And apparently, the two immediately hit it off.

They Took A Trip To Colorado In April 2018

Though it’s unclear when they officially started dating, Kroll made his first appearance on her IG grid in April 2018 when they took a trip to Colorado together. A few weeks earlier, Kroll posted a pic of himself and LeCroy riding bikes in South Carolina.

In July 2018, just days before the Southern Charm Season 5 finale aired, a video made the rounds on the internet, which seemingly showed LeCroy catching Kroll in bed with two other women. It’s unclear when the video was taken, though Kroll later claimed to Entertainment Tonight during a May 2019 interview that the incident happened "very early on" in their relationship before they were officially an item. Neither LeCroy nor Kroll commented on the video at the time.

According to Us Weekly, Southern Charm Season 6 began filming in the beginning of October 2018, though the first episode of the season didn’t air until May 2019. In Episode 3, Kroll confronted LeCroy after he heard rumors about her sliding into other guys’ DMs, and the two then decided to break up.

They Rekindled Their Romance In December 2018

In Episode 10 of Season 6 (which aired in July 2019), LeCroy joined the rest of the cast on a trip to Colorado, and based on this pic from Kroll’s IG, the getaway likely took place in December 2018. While on the trip, LeCroy and Kroll got flirty in a hot tub and ending up in bed together, and it wasn’t long before they reconciled their romance.

During a July 2019 interview with Us Weekly, Kroll admitted he and LeCroy had stayed in contact even while they were broken up. "Were Madison and I talking? A little bit prior to the trip, yeah," he said. “But we hadn’t really seen each other much, so I was kind of nervous [and] excited to see her because we were going to be on a trip with our friends so if we can’t act right here, then where can we act right?"

According to Bustle, LeCroy also responded to a fan’s IG comment to explain why she and Kroll reconciled. "Like every relationship — we have went through a few bumps in the road to get where we are now," she reportedly wrote. "A video taken several months ago, while we weren’t in a relationship is showing one side of a story, this will not tear us apart. We chose to forgive, forget and move forward with a fresh start."

They Went On A Staycation In March 2019

After rekindling their romance in late 2018, things seemed to be going well for LeCroy and Kroll for a few months. In March 2019, the two took a staycation together in Kiawah Island, South Carolina and both posted pics from the trip. LeCroy even captioned her pic from the vaca with "ILY from my head to my toes."

Kroll Explained The Cheating Video In May 2019

Nearly a year after the alleged cheating video went viral, Kroll finally explained what had gone down during a May 2019 interview with Entertainment Tonight, claiming the incident happened "very early on" in their relationship. He also confirmed "the relationship is intact today," but when asked whether LeCory was "the one" for him, Kroll replied, "We’ll just see."

That same day, LeCroy appeared on Watch What Happens Live with Andy Cohen, where she came clean about cheating on Kroll, explaining that she saw his own cheating incident as a "hall pass" to "do whatever" she wanted.

Apparently, that didn’t sit well with Kroll, who responded to LeCroy’s comments via Twitter. "What an absolute fabrication," he wrote. "Madison lied to me and begged the guy to not tell me about her indiscretion. Unbelievable."

They Confirmed They Broke Up (Again) In August 2019

At some point, the couple decided to break up again, and by the time the Season 6 reunion special aired in August 2019, the two were over. "Austen and I’s relationship is complicated, obviously," LeCroy told Us Weekly soon after. "He has said that multiple times. I think right now he’s focusing on his beer, which is so great." However, she said there was still a chance of reconciliation. "I don’t want to say that we wouldn’t revisit this, because we do feel a type of way about each other," she added.

They Got Back Together In October 2019

And soon enough, they did give their romance another shot. That October, they did a joint Halloween costume as President John F. Kennedy and Marilyn Monroe, and the following month, Kroll confirmed they were back on… kind of. "This week, I’m doing well with Madison. Next week, I’ll let you all know,” he jokingly told Us Weekly.

Once again, the couple seemed to be doing well following their Halloween reconciliation. In March 2020, they attended a wedding and looked very loved-up, but a pic from that event ended up being LeCroy’s last appearance on Kroll’s IG page. Eventually, the two ended up splitting, but because the production of Southern Charm Season 7 was interrupted by the ongoing coronavirus pandemic, it’s still unclear exactly when this happened.

Kroll Hung Out With Kristin Cavallari In October 2020

Kristin Cavallari first crossed paths with Kroll during her October 2020 trip to Charleston with her bestie Justin Anderson. "She came to town with her friend Justin and the four of us [with Craig Conover] had dinner," Kroll told Us Weekly in November. "We’ve all been in contact ever since. We’re in this, like, big old group chat, and the group chat is active. We had a blast with them and I’m gonna take a trip to see them in Nashville sometime soon."

Fans watched LeCroy and Kroll’s relationship grow strained during Season 7 of the series, and on Dec. 10, LeCroy announced she was single. "We are not together right now. I am 1,000% single, and so is he," she told Us Weekly. According to her, the pandemic tested their relationship. "I definitely think that quarantine was either gonna make it or break [our] relationship, and unfortunately, we did not come out stronger," she added.

Soon after, Kroll traveled to Nashville, and he sparked dating rumors with Cavallari after sharing a Instagram Live from a drunken night, which showed Cavallari dancing on Kroll’s shoulders. After Kroll left a flirty comment on a bikini pic posted by Cavallari, LeCroy reportedly replied to a fan who asked if they were dating, writing, "yeah, trust me if he was with her he wouldn’t be sending me songs at midnight… last night. Bless."

LeCroy later sparked dating rumors with Cavallari’s ex Jay Cutler (which he denied), and things got even messier. During part two of the Season 7 reunion episode, which aired in February 2021, Kroll had harsh words about his ex. "My heart just broke over and over again," he said. "She does not f*cking care about me and she never f*cking has." Yikes.

Something tells me LeCroy and Kroll are done for good this time.