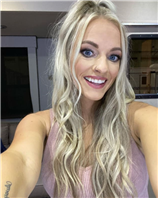 Mackenzie McKee is not a great person.

She’s said and done really horrible things, and she’s never sincerely apologized for any of them.

But still, there are certain things that no one deserves to hear.

And this message from a follower that Mackenzie shared on her Instagram story … she really did not deserve it.

If you follow Mack on any of her social media accounts, then you’ve probably seen that she shares a lot of videos of herself dancing, working out, jumping around, and generally acting goofy.

And since she’s so into fitness and also goes to the beach often, she’s usually wearing tight, minimal clothing while doing that.

There’s nothing wrong with any of that, of course.

In her latest posts, she’s been promoting her fitness company, Body by Mac, and it looks like she’s really been pushing workouts based around hip hop dancing, so we’ve been seeing videos of her dancing in athletic shorts and sports bras.

Because of that, someone felt the need to send her an incredibly nasty message.

“I don’t even know how you can claim to be a woman of God by the way you dance and flaunt your body to trashy music,” this person wrote.

As if that wasn’t rude enough, they also added “Your mom raised you better!”

What an incredibly low blow, right?

Mackenzie’s mother, Angie, passed away in 2019 after a horrific battle with cancer, and she understandably had a really difficult time dealing with the loss.

She’s been very open about how much she’s struggled, and how much she continues to struggle, so for someone to make a comment like that involving her mom …

And in her public response to the message, Mackenzie shared the same sentiment.

“When someone’s loved one dies, just don’t bring them up just to put someone down,” she wrote on her Instagram story after sharing the original message.

“PS, I will continue my dancing,” she added.

She went on with “Also, if you knew my mom, you knew she loved to dance.”

“I was an all-star cheerleader competing on multiple teams and individuals my entire life, while my momma, who raised me ‘better,’ stood in the stands and cheered me on while I boogied my little heart out on that stage.”

“Our family never had money but we were raised on love and dance parties,” she wrote. “I simply feel the music and have fun. Try it sometime.”

The thing is that there are so many things that someone could discuss if they wanted to criticize this girl.

She’s made several racist comments over the years, and more recently she’s taken to making other kinds of bigoted statements as well.

She’s been accused of abusing animals, neglecting her children, she’s been oddly braggy about cheating on her husband …

So for someone to ignore all of that and instead try to shame her for dancing … it’s just a shame, it really is.