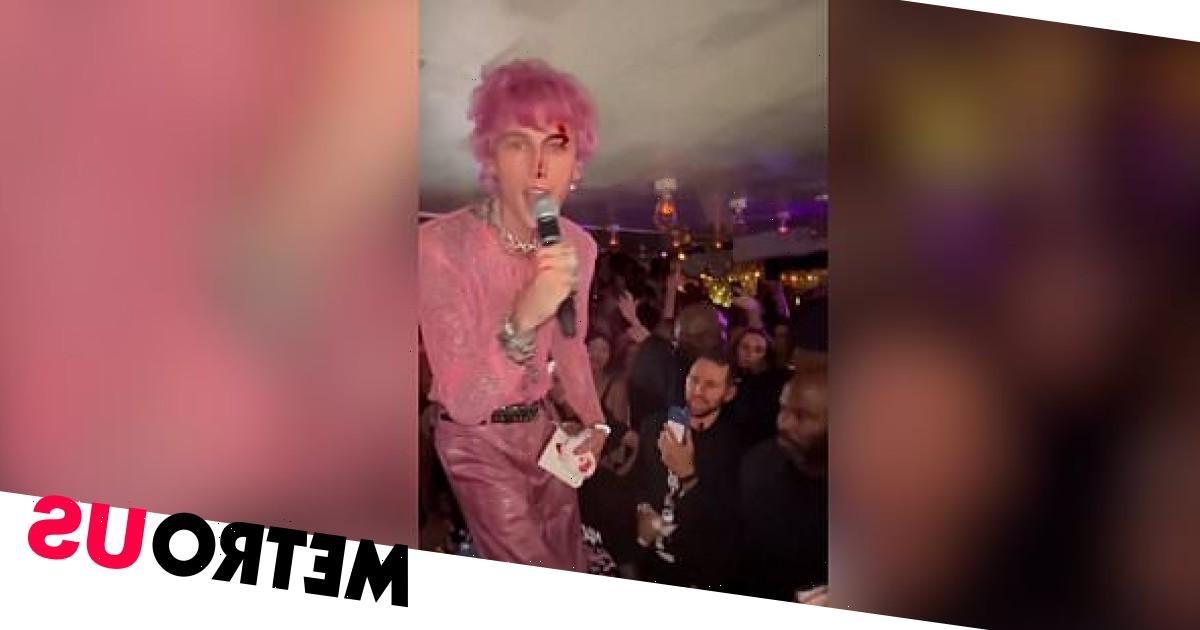 Machine Gun Kelly got into some self-inflicted bother while celebrating at a New York restaurant with fiancée Megan Fox.

The Emo Girl musician was in New York City where he had just performed a massive show at the iconic Madison Square Garden, and invited some of his celebrity pals to mark the occasion at a nearby steakhouse.

But by the end of the night the star was looking a little worse for wear as he left the venue bleeding from his face, some of the blood appearing to have run down his top.

The rapper, real name Colson Baker, appeared to have a nasty cut over his eye, leading fans to speculate over what had happened – and it turns out it was very much self-inflicted.

On Wednesday, Kelly took to Instagram where he shared a clip captioned simply: ‘And this is where things turned…’

In the video, Kelly makes a speech to the friends and fans who showed up to the afterparty.

‘I don’t give a s***,’ he told the crowd, before smashing a champagne flute on his face. 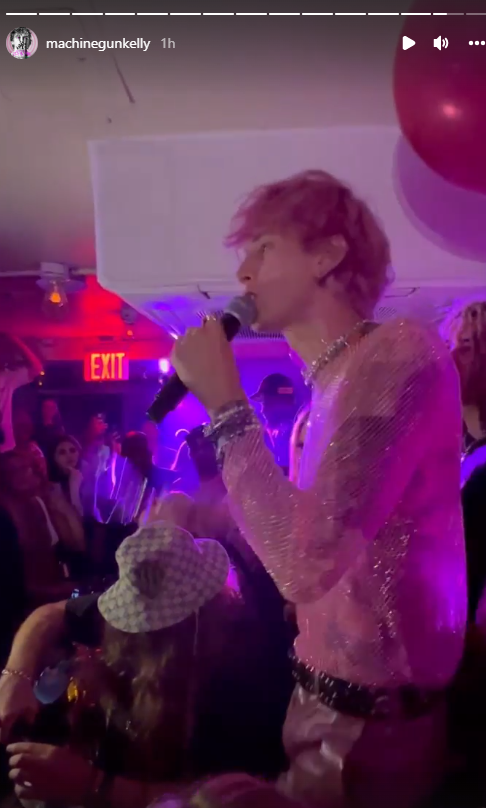 Despite gasps from the audience, the rapper remained unphased, and instead launched into his song Bad Things as he bled freely from the cut on his eyebrow.

Fans attempted to hand MGK wadded up paper towels to stem the bleeding, but the star still didn’t seem too bothered, continuing instead to sing to one of his best-known tracks.

The star captioned this particular video with a simple: ‘F*** it.’

Photographs taken later in the evening show Kelly and fiancée Megan leaving the glamorous restaurant, Kelly flashing a smile for the cameras but Megan at times covering her face.

MGK was dressed in an all-pink outfit and pink hair, his new trademark colour since the release of his Hulu documentary Life In Pink.

Megan meanwhile showed off her newly-dyed blonde locks as she dressed in a hot pink crop top, and carried with her a bouquet of flowers, which she used to hide behind.

The celebrity couple are already fairly well-known for dabbling with blood (no, really), and have made multiple references to drink each other’s blood.

Despite their, er, quirks, it’s clear MGK and Megan are head-over-heels for one another and have been through a lot together.

The rapper recently revealed how he attempted suicide in 2020 following his father’s death, while at the same time dealing with ‘wild paranoia.’

Kelly was raised by his father, after his mother – whom he has recently reconnected with – left when he was nine, and his death devastated the musician.

This difficult moment helped him realise things were ‘not right’, however, and MGK revealed that it was Megan as well as his 12-year-old daughter Casie, who he shares with ex Emma Cannon, whose care prompted him to seek help.

‘They simultaneously came at me with this like, “I want to be able to see in your eyes. I don’t want to be talking to you through a veil anymore.

MGK popped the question at the beginning of the year, with the couple celebrating in their usual style: By ‘drinking each other’s blood’