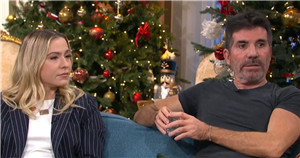 Simon Cowell surprised everyone as he went to hug singer Lucy Spraggan after her emotional performance on Wednesday's show of This Morning.

Former X Factor star was joined by Simon Cowell on This Morning as the pair talked about their upcoming project together.

During their appearance, Lucy performed her new single called Balance, which called for an emotional performance due to the nature of the song.

Lucy was seen trying to hold back her tears as she was singing, but inevitably gave in to them as she finished the song.

As Lucy finished singing, Simon could be seen coming over to her with hosts Alison Hammond and Dermot O'Leary as he soon wrapped her in a hug and told her how beautiful the song was.

Hosts Alison and Dermot also showed off their bare arms as they got goosebumps from her performance.

Lucy, 31, met the Britain's Got Talent judge in 2012 when she auditioned for the X Factor and now, a whole decade later, Simon is publishing her songs.

Explaining more of his partnership with 2012 contestant Lucy, Simon said: “I have my own publishing company where I sign writers and about two years ago we met up and I said apart from being a great artist she is a brilliant songwriter, so I said I wanted to publish her songs…”

Simon continued: “Great songs are like great paintings, but then Lucy played me this demo called Balance and I always remember where I am when I hear a great song for the first time and it's the best feeling in the world… and I’m obsessed with this song by the way!

"And now in my life you have to do something you’re passionate about, and this is something I’m super super passionate about. The song is so relevant to what is going around in the world right now, it’s a great message.”

Simon is a music producer and the owner of Syco Records, which has produced music for musicians like One Direction, Little Mix, Westlife and Leona Lewis.

Simon has also appeared as a judge on a variety of shows including Britain's Got Talent and the X Factor, which is how he met Lucy.

The hit ITV show X Factor was axed in 2018 after 14 years on screen and the topic of its return was brought up by Alison who admitted she was "really missing" it.

Simon was asked if he’d like the show to return, to which he said: "People always ask me, are you going to bring back the show. I actually think 100,000 new songs are uploaded every day at the moment."

Speaking on what he would do differently on the show today, Simon replied: "There’s a lot I’ve learnt to be honest with you.

"I think it started to become a bit of a machine. You put a record out that year and you move on, and that’s not the way to do it. And when you throw someone into the limelight, it’s hard, you know?"

He then teased: "So look, to be continued…”