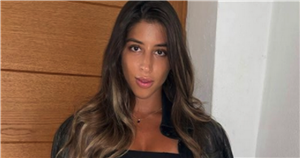 Love Island’s first dumped Islander this series Shannon Singh has reunited with her ex-boyfriend in the outside world.

After an unsuccessful stint trying to find love in the Spanish villa, the brunette beauty has decided to give things another shot with DJ Ben Sterling.

The 23 year old, who recently complained about being bombarded with cosmetic offers since leaving the show, explained that their reconciliation wasn’t planned, but sparks flew when the pair saw each other at an event recently.

"Ben and I bumped into each other a few weeks ago at a festival and we have decided to see where things go,” the Scottish model revealed.

Speaking to the Mail Online about the rekindled romance, Shannon continued: "Nothing is official.

“But we are really enjoying each other's company right now and not putting any pressure on things."

The former ITV2 star only managed to stay on Love Island for 48 hours before being the earliest contestant to get dumped.

But despite a rocky start to her life in reality TV, Shannon has dusted herself back off and managed to find happiness elsewhere.

Become an OK! VIP and get all of our exclusive interviews, videos and stunning photo shoots sent straight to your inbox every week!

You'll receive an email with stories exclusive only for OK! VIP members, including celebrity house tours, baby reveals, wedding snaps and so much more!

Sharing a snap of Ben to her grid, Shannon captioned: "Find your happiness folks and make sure you keep it."

The couple initially began dating back in 2020, splitting up in March this year.

It came only a month after Shannon flew to Mexico for Ben’s birthday party.

Find out more about the latest gossip from Love Island with the OK! newsletter in your inbox every day

Shannon’s premature exit from Love Island came as a result of Chloe Burrows’ entrance to the villa.

The 25 year old bombshell initially chose to couple up with Aaron Francis, leaving Shannon single and immediately dumped from the island.

But despite the brutal exit, Shannon has since admitted she wasn’t impressed with the boys in the villa at the start anyway, having told Glamour they were “not men” but “just boys”, and even claimed she experienced Toby Aromolaran's "temper".

Love Island continues tomorrow at 9pm on ITV2 and ITV Hub. Episodes are available the following morning on BritBox