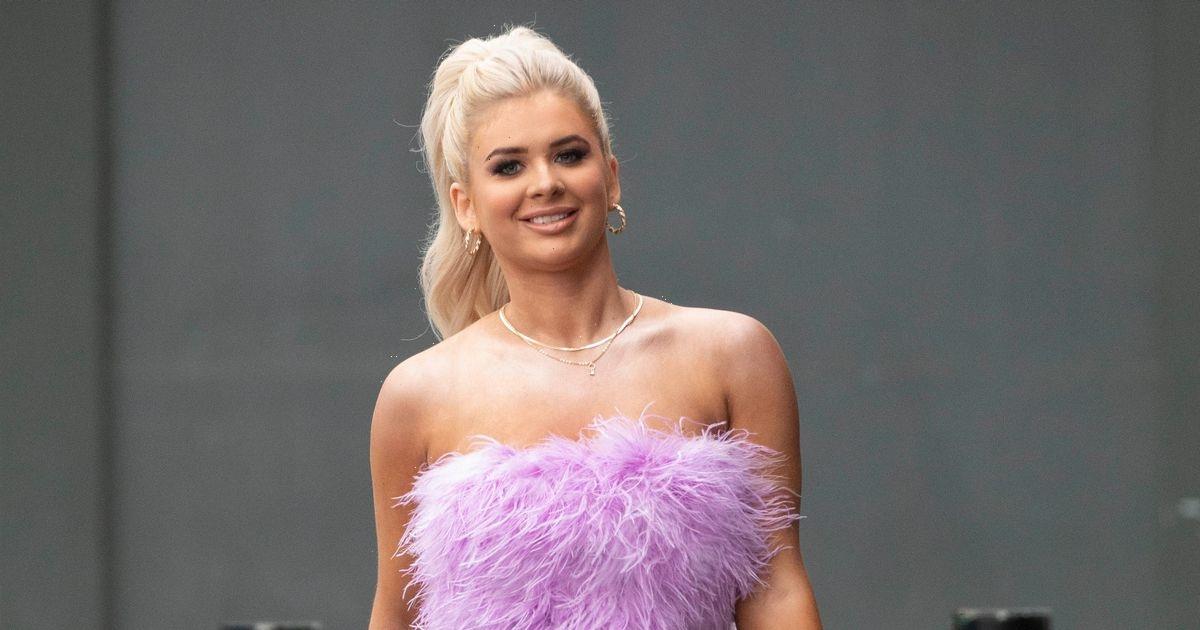 Liberty, 22, who won over the hearts of the nation on last year's Love Island, was seen leaving the The Hair Extension Group Salon today in Haunchwood Road, Nuneaton, after having the most discreet new ghost Weft fitted.

The blonde beauty, who is the new brand ambassador of the company, was seen grinning from ear to ear when she left the salon after a photoshoot.

With her mane swept up into a ponytail, the star wore a full face of make up, with a smokey eye and a nude lip.

Wearing a pink feathery strapless top, the reality star oozed glamour with her wide-legged jeans and open-toed heels as she walked down the street.

Accessorising with a silver bag and gold jewellery, including hoop earrings and chain around her neck, Liberty looked every bit the fashion icon that she is.

Founder of the salon, Ola Goldsmith, spoke highly of the Islander as she said: "Liberty is a perfect fit to be our brand ambassador for our new Ghost Weft she is a true girls girl through and through with a huge heart as witnessed on last years Love Island."

"Liberty stands for everything our company believes in and we are so excited to have her onboard".

It comes after Libery recently shut down rumours about her love life after being linked to TOWIE's Roman Hackett.

Setting the record straight on Instagram, she told her legion of fans: "All these mad stories in the press today.. I haven’t been on any dates! I’m a single pringle.”

“Career focused and on my boss babe energy. On that note, can’t wait for you guys to see what I’ve been shooting today. It’s been unreal.”

However, Roman is dating another Love Island star – Summer Botwe, 22, who appeared on this year's season during the Casa Amor episodes.

Speaking to The Sun, he said: "Liberty was the last girl that I was with. But now there's someone else, it's a Love Island star."

According to the publication, Roman called Josh Le Grove to ask if it was alright to reveal her name, to which Josh responded: “Summer [Botwe]… She left me, I found these two in bed.