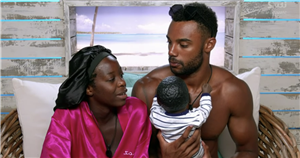 Love Island fans have been left in hysterics after Kaz Kamwi revealed she thinks babies breathe through the tops of their heads.

The 29 year old fashion blogger woke up in the morning to the sounds of crying infants in the neighbouring room alongside her fellow Islanders.

Each couple were given the task of feeding, caring for and comforting their plastic baby as well as change their nappy when needed.

Kaz, who has been named as favourite to win fashion deals this season, and Tyler Cruickshank, 26, immediately scooped up their child and headed for the Beach Hut, where they shared they'd named their baby Benjamin.

As Tyler stroked little Benjamin's head, Kaz said: "What are you doing to his head? You're not supposed to touch the top of babies head apparently."

Clearly unconvinced, Tyler said: "What? What are you talking about?"

Fans immediately took to Twitter to share their confusion by her statement as one person wrote: "#LoveIsland WHY IS NO ONE TALKING ABOUT KAZ SAYING YOU CANT TOUCH BABYS HEADS, BECAUSE THEY BREATHE THROUGH THEM!! Like what??".

Another said: "Can I just circle back to Kaz seemingly thinking that babies breathe out the top of their heads? What? #LoveIsland".

A third chimed: "I have to know who told Kaz babies breathe from the top of their heads #loveisland".

While a fourth added: "Kaz saying babies breathe from the top of their heads… they’re not dolphins babe #LoveIsland".

It comes after Kaz recently came to blows with Aaron Simpson, 24, after the recent voting on which couple was the "least compatible".

Unhappy about Kaz and Tyler voting for him and Mary Bedford, 22, he confronted the stunning star, explaining: "Like for me, I'm not so much annoyed, but it's like I don't really understand."

To which Kaz explained: "Not going to lie, we felt like it was a little bit more one sided. We thought Mary was more into you than you were into her just a little bit."

Aaron then ranted: "I just think it's a bulls**t, cop out excuse, Kaz."

"Don't ask me a question if you're not ready for my answer! I'm going to park you there so I can finish my sentence then you can decide what to say to me," Kaz then hit back.

While the pair kept going back and forth, the following the day their argument was squashed as Aaron decided to apologise to Kaz about his behaviour.

For all your updates on all the Love Island drama, sign up to our Factor 50 newsletter.