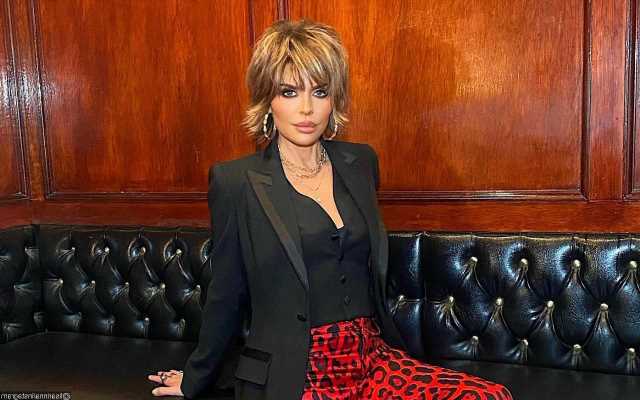 Patrick Somers also hits back at the actress, saying that he is seeking legal action after the ‘Real Housewives of Beverly Hills’ star reveals his phone number online.

AceShowbiz –Lisa Rinna chose to take matters into her own hands when someone threatened to expose her dirty little secrets, but it only backfired. The reality TV star has been slammed after leaking someone’s personal phone number.

Lisa apparently stirred up the drama first as she shared a sreenshot of a text she received from an unsaved number. “Lisa, you need to stop with your rumors and lies about me. There’s plenty I can expose about you…,” the person wrote to her.

Lisa wrote over the post, “You exposed yourself,” in bold red letters, without censoring the number. She added, “Hey expose away can’t wait to see what you’ve got,” seemingly threatening her nemesis.

Needless to say, her fans dialed the number and found out the man was Patrick Somers. “I just called the number and they said ‘hello this is the executive assistant of Kathy Hilton,’ ” one fan shared, referencing Patrick’s rumored occupation with Lisa’s “The Real Housewives of Beverly Hills” co-star.

Patrick also revealed he has received “thousands of text messages” from unknown numbers, trolling him. Meanwhile, Lisa has caught heat for leaking Patrick’s number, with some accusing her of doxxing, which is the action of revealing previously private personal information “typically with malicious intent.”

“Is it illegal to publish someone’s number like that? Some form of doxxing?” one Twitter user pondered. “Lisa entering her doxx era,” another fan claimed. A third person wrote on Reddit, “I can’t believe she posted the phone number. Unbelievable.”

Patrick has also hit back at Lisa for revealing his phone number online. “@lisarinna Why are you starting drama with someone who is half your age you overfilled ancient dinosaur. Anyways here’s Lisa’s number since she posted mine,” he wrote, getting his revenge by unveiling her number.

He later addressed their feud on his Instagram Stories, saying, “Mind you… this is because Production has started on a series called ‘real husbands of sunset’ and the series is set to compete with the real housewives and features an all male cast . . . . (me being a member).”

“We met Lisa just to get some pointers for our first season and drama started from the beginning,” he divulged. He continued his rant, “I honestly don’t like drama but imagine an unhinged 70 year old women starting drama with you because you privately tried to check her.”

“Not only did @lisarinna post my number once… she deleted it and the posted it again to double down on her rant about me,” Patrick accused Lisa. “Giving millions the chance to call and text and look up personal information associated with my phone number.”

Patrick said he’s considering to take legal action against Lisa. “For that reason only, im looking into all my legal avenues,” he stated. “it’s not like she has any money anyways but more of a principal thing.”

Patrick went on taunting the “Melrose Place” alum, “You need to go worry about YOUR husband and YOUR finances and who he’s spending his time with because his wife is too busy running her overfilled mouth.”