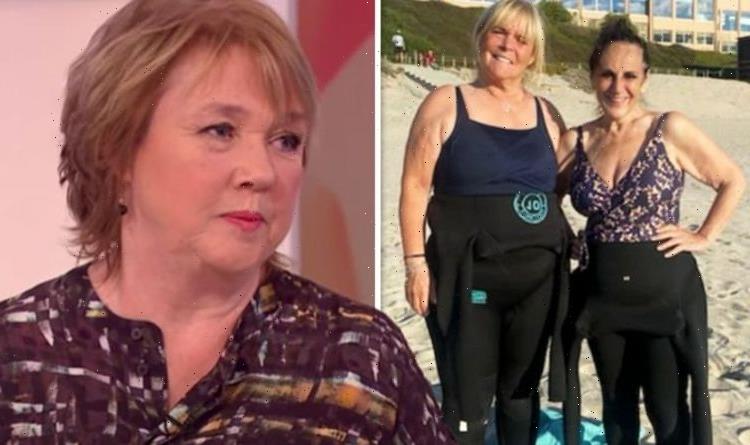 Loose Women’s Linda Robson, 63, has teased her 132,000 Instagram followers by sharing a sneak peek into her “secret trip” with her Birds of a Feather co-star Lesley Joseph, 75. Linda took to social media this morning to post several photos from the pair’s trip, hinting that she will soon reveal “what we have been up too”.

The first photo showed Linda and Lesley pulling silly faces for the camera while dressed in black waterproof clothes from top to toe.

They also wore protective goggles over their eyes.

The second snap featured Linda grinning in a restaurant with a beautiful vista in the background.

The third and final picture showed Linda and Lesley with their arms around each other on a beach.

The actresses wore swimsuits and wetsuits while enjoying the sunny weather on the sand.

Linda captioned the post: “Having a secret little trip away with my mate les!

“Look forward to you finding out what we have been up too! hope you are all well!

The pals’ “secret trip” comes amid claims that Linda has “fallen out” with fellow Birds of a Feather actress Pauline Quirke, 62.

It was reported that the duo had fallen out after 50 years of friendship, which resulted in Pauline refusing to take part in the classic sitcom’s 30th anniversary show in 2019.

However, Linda recently denied rumours of a rift between them during an interview with Kate Garraway and Adil Ray on Good Morning Britain.

“Have you had a falling out with Pauline Quirke?” Kate asked the star. “What is that all about?”

Linda shook her head over the claims and insisted Pauline simply no longer wants to be an actress.

She replied: “I haven’t had a falling out with Pauline. She just does not want to act anymore.”

Linda continued: “Because we did a Christmas special – Pauline doesn’t want to act anymore.

“She wants to concentrate on her academy. That’s all.”

She added: “There’s been no falling out whatsoever.”

Kate continued: “Is everyone happy?”

Linda replied: “Yes. She just does not want to act anymore. We’ve got to respect her wishes.”

“They asked us if we would like to do it and we said we would be happy to do it.

“It was a really good Christmas special.”

Linda went on to say she would consider doing a spin-off version of Birds of a Feather, but only if Lesley joined her, as she wouldn’t want to reprise the role “on her own”.