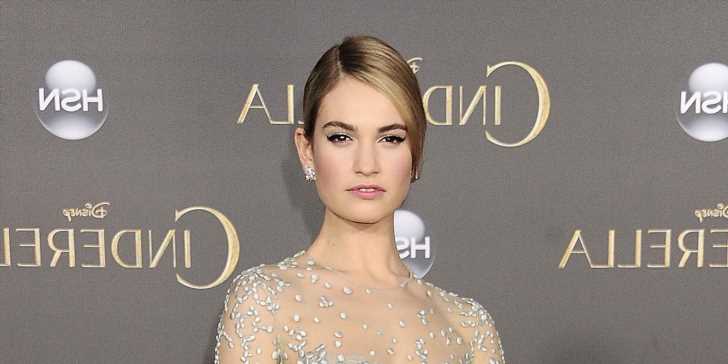 Being an actor (and an award-winning one, at that), Lily James often undergoes transformative looks to – shall we say – ‘get into character’. Over her lengthy career on screen, we’ve seen her channel a range of people, including the likes of Cinderella with ‘fierce Princess beauty’, Pamela Anderson with her iconic updo and not to mention going full-on goth mode with her jet-black micro-fringe look for Versace. Talk about method acting, ey.

Now, the star has only gone and inhabited a brand new look for her most recent role in the upcoming film, Finalmente L’alba. Brace yourselves, folks, for Lily is now a redhead. And what a time to do it with autumn right around the corner!

Set photographer, Eduardo Castaldo shared a first-look image from the movie on his Instagram feed which also debuts Lily’s new ‘do.

If you thought the long bob (aka, the ‘lob’) ringlet hair and sultry red lip makeup looks were giving circa 1950 Hollywood vibes, you would be right. The high-end costume drama, which also features actors Willem Dafoe and Joe Keery, is to be a classic period piece.

Now, I know what you’re thinking: this hair (which is most likely a wig) is a temporary transformation and strictly for Lily’s character as Josephine Esperanto. However, what we will say is that red for autumn 2022 is such a vibe. I mean, as the general rule goes, with the change in seasons, there also comes a change in hairstyles – just take Khloé Kardashian’s honey blonde look as a prime example.

So, just like Karen Smith’s breasts can always tell when it’s going to rain (IYKYK), I can sense a new hair trend picking up…