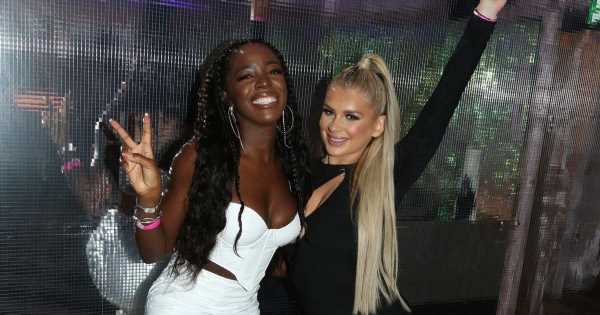 Liberty Poole and Jake Cornish finally came face to face as they partied at a Love Island reunion.

This year’s stars all got together for a big night out at a London venue Thursday night.

Brighton-born babe Lucinda was celebrating turning 22 with all her villa friends as they got down to partying and sharing memories from their sun-soaked summer of fun in Mallorca.

The likes of winners Liam Reardon and Millie Court turned up in their glamorous best, with Kaz Kamwi glued to her bestie Liberty’s hip too.

It comes as Jake recently opened up about receiving a "lot of DMs" from girls wanting to "date" him since the show.

Also spotted were Georgia Townend and Aaron Simpson, who posed in a snap with Jake during the festivities.

Water engineer Jake, 24, was dressed in a smart white shirt open at the collar and black suit trousers for the ‘do.

While 22 year old Liberty swept her blonde locks into a topknot ponytail and chose a figure-hugging black minidress for the party.

The star showed off her svelte legs in a pair of black heels and opted for full-glam makeup.

While the pair weren't pictured together, both Liberty and Jake were in good spirits as they danced and chatted with all their friends from the show, despite the latter recently revealing everyone had "gone their separate ways" from the show.

It was the first time the exes had been in the same room for a shindig since their awkward filmed reunion in London upon their return from Spain.

During that chat back in August, the former couple were miles apart emotionally, and Weston-Super-Mare star Jake told Liberty he didn’t think there was anything left between them.

Since then, Birmingham-born Liberty has been focusing on her career, which continues to go on the up and up.

Not only has she announced her move to launch a fashion collection with In The Style, but the fan-favourite is also training for Dancing on Ice too.

The beauty is gearing up to compete in the ITV competition’s 2022 series.

Love Island is expected to return next summer to ITV2.

For all your latest updates on this year's Love Island stars, sign up to OK!'s daily newsletter.