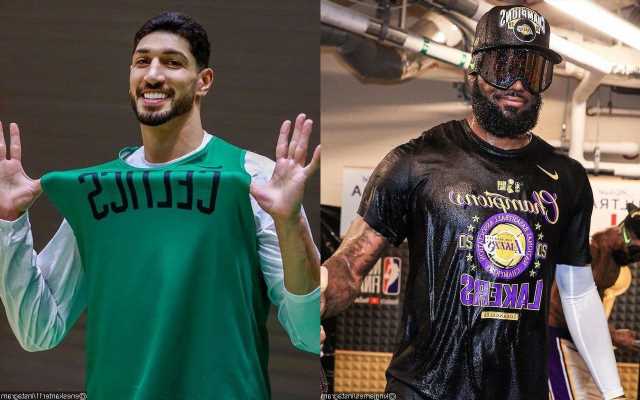 The Lakers player gets slammed by the Boston Celtics center after he reveals that he’s ‘very skeptical’ and says that he doesn’t want to be a ‘public advocate’ for the coronavirus vaccine.

AceShowbiz –LeBron James is facing criticism after going public with his decision to not urge other NBA players to get vaccinated. Among those who criticized the NBA legend’s “ridiculous” stance on the COVID-19 vaccine was Enes Kanter.

When making an appearance on CNN on Sunday, October 3, the Boston Celtics center called out LeBron for his remarks on the coronavirus vaccine. “When I heard it, I was very disappointed, and it’s ridiculous,” the 29-year-old told host Pamela Brown.

Further expressing his disappointment, Enes added, “Obviously, LeBron James, he’s one of the faces of the league, and he should be the first one to go out there and say, ‘Listen, everyone. I got the vaccine.’ ” He continued, ” ‘And I’m encouraging everyone, my community, everyone, basketball fans, non-basketball fans and sports fans are just going out there and [getting] this vaccine, so we can save other lives.’ “

Enes further elaborated, “When I heard that, I just couldn’t believe it.” The professional basketball player went on saying, “But I hope he can educate himself about this vaccination and inspire and encourage other people around him.”

Enes’ comments arrived just a few days after LeBron revealed that he was “very skeptical” about getting the shot though he and his family got vaccinated. LeBron also said that he did not want to be a “public advocate” for the coronavirus vaccine. “I know that I was very [skeptical] about it all, but after doing my research and things of that nature, I felt like it was best suited for not only me but my family and my friends, and that’s why I decided to do it.”

“I think everyone has their own choice to do what they feel is right for themselves and their family,” LeBron explained. “We’re talking about individual bodies. We’re not talking about something political or racism or police brutality,” the Lakers player added. “I don’t think I personally should get involved in what other people do for their bodies and livelihoods.”