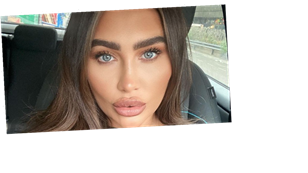 Lauren Goodger has hit out at Good Morning Britain presenter Piers Morgan after he slammed abuse on Twitter just one month after calling the former TOWIE star a "halfwit".

In early January, the 34 year old pregnant star explained she doesn't believe in face masks and won't be getting the Covid-19 vaccine. She explained to the Daily Star that she is "more scared of the vaccine than I am of the virus" and doesn't like taking medicine.

She added: "I don't believe in masks – I am not going to get into the subject."

Following these comments, Piers, 55, proceeded to furiously rip into the TV personality on the ITV show as he said: “I mean these people are absolute halfwits… they’re not even halfwits, they’re quarter-wits!”

However, on a recent segment of the popular daytime programme, Piers called out people who "spew abuse" on social media site Twitter.

Gemma Collins, 40, shared a clip of his epic rant on her Instagram feed, where he told viewers: "No one should have to put up with people on Twitter spewing the kind of vile abuse and death threats that they have been spewing at Gemma Collins. From the moment I announced I was interviewing her, out it poured. People on Twitter saying, 'I hope you die,' literally. I was literally reading this stuff."

Co-host Susanna Reid, 50, questioned: "What is wrong with people?"

Piers continued: "It's more than that. This is a malevolent thing isn't it in our culture, in our society now. There's no regulation. If a newspaper did that or if we did that today, if we spent the next five minutes wishing people dead, we'd be taken off air.

"Literally, Ofcom would intervene and we'd be taken off air. But nothing happens on Twitter to these morons who abuse footballers or Captain Sir Tom as we saw and then Gemma Collins. Alright, a more decisive, polarising figure, but she shouldn't have to have people wishing her dead on a public platform with no repercussions for people who do that."

Gemma captioned the video: "Time for the social media companies to ACT NOW TONIGHT 9pm @itv LIFE STORIES thank you always to @piersmorgan for being so supportive of me why aren’t the social media platforms banning people for misuse hate and negativity ?" [sic] with two celebration hands emojis.

"Should they be doing a lot more !!! HELL YES why do the platforms allow it ??" alongside another celebration hands emoji.

Amongst Gemma's celebrity friends who commented on the post was Lauren, who couldn't help but hit out at Piers after he "abused" her on TV earlier this year.

Lauren wrote: "LOL so when you abused me live on TV with no facts behind what you was saying @piersmorgan .. what did you think happened to me on Twitter and dms? [sic]

"I am pregnant @piersmorgan that's why I won't be having the vaccine so thanks for trolling and calling me names… but anyway you rise above trolls @gemmacollins I'll be watching you," [sic] followed by a kissing emoji.

Supportive fans agreed with Lauren as one person replied: "@laurengoodger hes always double standards lauren one day it will backfire, just sit back and watch!" [sic]

Another said: "@laurengoodger totally agree with you, he's only happy when he's talking over someone…" [sic]

While a third added: "@laurengoodger exactly well said. Be kind @piersmorgan. It's easy to be kind and not a bully".