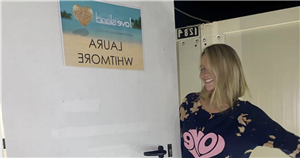 Laura Whitmore has shared her excitement for the Love Island final as she gave a rare behind-the-scenes glimpse of the ITV2 set.

The 36 year blonde beauty, who has been criticised by viewers of the hit dating show for only featuring three times since the show started in June, gave a sneak peek of her dressing room in a snap to her 1.5million Instagram followers ahead of the final on Monday 24 August.

Laura, who shares daughter Stevie Ré with husband and narrator Iain Stirling, looked every inch the natural beauty as she posed in a denim shorts and a tie-dye navy sweatshirt, which read: "Love".

The presenter captioned the post: "Who needs sleep when you have LOVE! Final countdown is on!"

Laura also shared a snap of 'late night filming' as she gave a thumb's up on her Instagram story while wearing a gold face mask.

Panning to her colleague taping over her window, Laura said: "This is just the glamour of behind-the-scenes here. It is very Friends isn't it? The furniture outside."

Laura has visited the villa just three times this series, despite pocketing £600,000 to host the show.

She appeared in the launch episode, the Casa Amor recoupling episode and, most recently, surprised the Islanders at the Island Vibes Club, where Abigail Rawlings and Dale Mehmet were dumped.

It was recently revealed why Laura doesn't isolate as she travels to and from the Spanish island, presenting Aftersun live from London every Sunday night.

One fan recently commented on Twitter: "How does it work for Laura Whitmore .. like going to the villa and then doing after sun like is there no quarantine?"

Another said: "Why does laura whitmore not have to quarantine in between after sun and being in the villa but the dumped islanders do? confused."

However, the quarantine rules only apply to those who have not received their two vaccinations and Laura recently revealed she is doubled jabbed.

Opening up about the logistics of her filming schedule in a recent Instagram Q&A, Laura explained: "The Balearic Islands were in amber so when I did [go there] I had to isolate for five days, I'm not sure everyone knew that. I had to isolate five days on my return.

Then [rules] went green, and now it's amber again, but I'm double vaxxed.

"I also have to be in London every Sunday as part of my Love Island contract. I need to host Love Island: Aftersun, which I love. It's just so much fun, I love live telly.

"But that's another logistical nightmare, that we need to make sure that I'm always back in time for that. If I could, I'd probably just move into the island, I mean who wouldn't?"

For the latest Love Island gossip, make sure to sign up to OK!'s daily celebrity newsletter and Factor 50 – your one stop for all the latest villa news.

Love Island continues nightly at 9pm on ITV2 and ITV Hub. Episodes are available the following morning on BritBox.