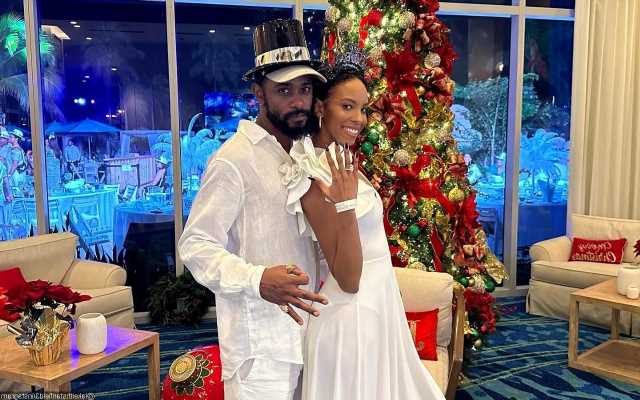 Even after being slammed by his baby mama, the ‘Atlanta’ actor appears to be unfazed as he shares a happy picture of him celebrating the new year with his fiancee Kasmere Trice.

AceShowbiz -LaKeith Stanfield is unbothered. The “Atlanta” actor, who was recently slammed by his baby mama, took to his Instagram account to share a happy picture of him ringing in the new year with his fiancee, model Kasmere Trice.

Shared on Sunday, January 1, the picture saw the couple snuggling to each other in front of a glamorous Christmas tree. The two dressed in all-white for the occasion. The actor was seen wearing a black hat, while his model fiancee looked stunning donning a crown on her head. “Happy new year!” so LaKeith simply captioned the photo.

The post arrived after artist Tylor Hurd came forward with the allegations that the actor is the father of her baby girl, Apollo. She shared on Instagram a reel featuring a sweet moment between her daughter and the actor.

In the said video, which was shared on Saturday, December 31, LaKeith could be seen dancing in front of the newborn as she sat in a chair watching him. The “Sorry to Bother You” star was also pictured holding Apollo for a photo shoot and at a family entertainment center.

LaKeith responded to the allegations after The Neighborhood Talk reposted the video. Writing in a now-deleted comment, the actor appeared to be taking an issue with Tylor posting their daughter. “Thanks for respecting my not wanting to blast my child out to the internet,” he sarcastically wrote. “Very considerate of you.”

In response to that, Tylor wrote back, “value your privacy is why you lied to people saying she wasn’t your baby or that I was just a random? you value your privacy but your gf post (sic) everything y’all do lol okay.”

The 24-year-old later shared a lengthy message on Instagram Story after she was criticized for outing LaKeith shortly after the announcement of his engagement. “Just to clear a few things up, I’m not jealous that he’s engaged to a woman he’s known for five months,” Tylor said, “I tried to meet the girl and everything and she ignored me when I tried.”

“What I’m upset about is that he’s made more time to spend with this woman than he’s spent with Apollo her whole life, and has been actively ignoring me when I’m trying to figure things out for our child,” she continued. “And those clips of him and her together are all I have in general cause he barely sees her.”