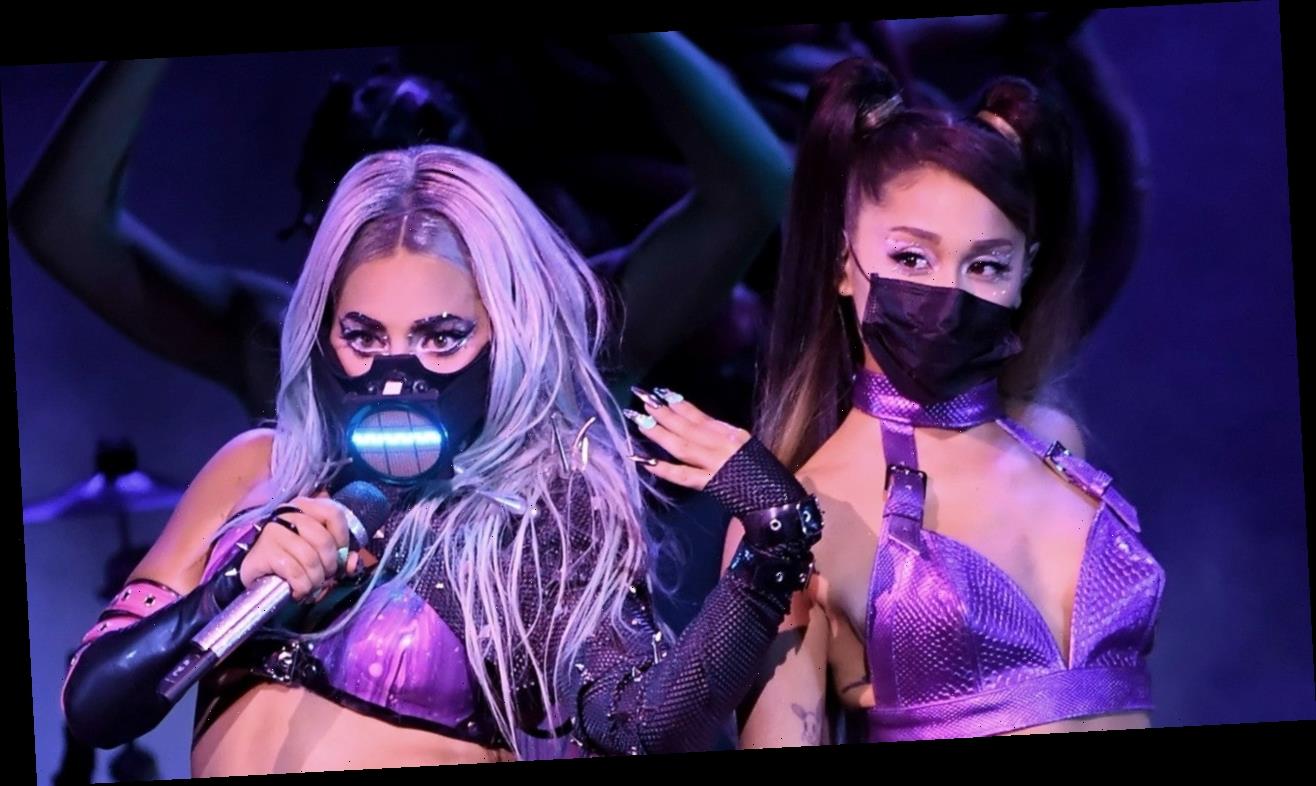 Lady Gaga and Ariana Grande performing onstage again is the entertainment we needed during this pandemic. The powerhouse singers teamed up to perform their latest hit, “Rain on Me,” at the 2020 MTV Video Music Awards on Sunday, and needless to say, the ladies delivered.

Gaga pulled out all the stops for her stage look, starting out in lime green to perform her Chromatica track “911,” before “changing real quick” into her fuchsia “Rain on Me” ensemble, both looks complete with a digitized face mask. Grande also sported a face mask, along with a purple crop top and skirt ensemble, similar to the “Rain on Me” music video.

After “Rain on Me,” Gaga changed again, slowing things down at the piano for a performance of “Stupid Love,” during which she sent some words of support to fans, encouraging them to stay strong and “mask up!”

[email protected] took us on a JOURNEY through #CHROMATICA with this incredible #VMA performance! ? pic.twitter.com/jBjaUpZtfG

Earlier in the night, the duo won Best Collaboration and Song of the Year for the track, both of which Gaga accepted.

“Thank you, MTV. This means the world,” she said in her acceptance speech for Best Collaboration. “Ariana and I really connected through this song… [We] are truly soul sisters. Girl, this is for us. We have both been through some s**t together. We are willing to share it with each other. When we were in the studio, we turned our tears that felt like endless rainfall into diamonds. I will treasure these diamonds with you forever, honey. I love you. I love you, Little Monsters. You rock.”

When accepting Song of the Year, Gaga looked back at the emotional songwriting process once again, sharing, “I remember thinking I had cried so many tears that it felt like unfathomable downpour from my eyes… Even with that much rain, you don’t have to drown, even though it feels like you are. You can swim. If there’s a strong current and the waves keep crashing over you, you’ll keep swimming and you’ll reach the center of the ocean where it’s calm, still, and peaceful. May God bless you.”

The performance marked Gaga’s highly anticipated return to the VMAs stage, after she last performed at the annual awards show in 2013.

Back in May, following the release of the intergalactic “Rain on Me” music video, ET spoke with designer Laura Pulice, who created the fierce and futuristic looks for Gaga and Grande. She told ET that the video was filmed in Los Angeles, prior to concerns about the coronavirus.

“I was asked to do one look for each. Initially Ariana’s look was white and silver, but as you can see, [it] was switched to lilac,” she revealed. “Gaga wanted to add spikes to her piece to make it more punk, and because of time I did that on set. Plus she likes having me around in case something happens to the latex.”