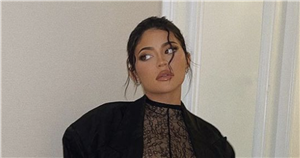 Kylie Jenner surprised fans with a new look at her growing baby bump as she was driving her luxury car.

The 24 year old KUWTK star took to Instagram to share a snap of herself behind the wheel as the camera pointed down at her belly.

The star was dressed casually in black cycling shorts and a grey vest on her day out with daughter Stormi.

Another photo shared by Kylie showed her holding hands with her little girl as the pair made their way to the car.

The Keeping up with the Kardashians star has only recently confirmed she and partner Travis Scott are expecting their second child.

Kylie had shared an adorable video revealing the pregnancy that followed her journey so far.

The video follows Kylie as she spends time with her family, with a sweet shot of Stormi even kissing her belly.

The video also features the reveal of their exciting news to other family members, with momager Kris Jenner appearing as she’s handed an envelope with an ultrasound image inside.

It comes as Kylie posted about how “sad” she was to not be able to attend the met gala this year.

She wrote: "i'm so sad i couldn't make it this year, i can't wait to see all the looks."

Outside of being an expecting mother of two though, Kylie has been hard at work building a new line of baby products.

Launching a new Instagram for the business, Kylie Baby is set to launch later this month.

Just a week ago, fans of the star attempted to figure out the due date of her unborn child, with a reddit user saying: "Okay guys, I'm looking at the colorful PJ's Kris is wearing in Kylie's announcement video.

"Kris is wearing them when Kylie tells her she's pregnant, and I'm presuming this was around week 6 of Kylie's pregnancy.

"Kim posted the pic linked above in her Mother's Day story on May 9th, it was a video of Kris opening presents so she was wearing those pajamas that day.

"It would also make sense that Kylie would tell Kris on Mother's Day as her gift!," the fan continued.

"If this was ~week 6, the first day of Kylie's pregnancy would've been March 28. This puts her at about 23 weeks along, making her due date January 2!"