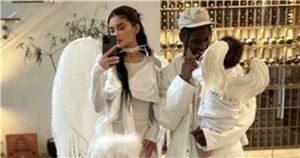 Kylie Jenner fans are convinced they have worked out her baby boy's name after spotting a subtle 'clue' in her latest Instagram post.

The Kardashians reality star, 25, welcomed her second child with boyfriend Travis Scott earlier this year, but has been keeping the tot's name a secret after changing it from Wolf shortly after his birth.

The couple decided Wolf "didn't feel like it was him" but have kept his new name a secret so far.

Fans are now adamant they have worked out the baby's name thanks to a picture of Kylie's Halloween festivities.

The makeup entrepreneur took to her Instagram Stories on Tuesday to share a snap of her family's matching angelic costumes. Kylie wore huge white wings to match her baby son, while her daughter Stormi had a fluffy halo.

Rapper Travis, 31, donned a white denim jacket and jeans along with a matching hat.

People quickly took to Reddit to discuss the pictures, with many fans saying they believe the baby's name is Angel.

"Maybe his name is angel," one person wrote. Another added: "Oooh, that makes sense. Really strange that they still keep it a secret, it's just a name…"

A third fan said: "I remember some of us predicted that they'd name wolf angel because of his 2/2/22 birthday – i'm hoping this costume is a soft launch of his name."

Someone else agreed: "Some people had this theory! esp since he was born on 2/2/22 which is an angel number. doesn’t explain why they’re still keeping it a secret tho…"

"I love that name for a boy," said another fan.

The name Angel has been suggested before, with some eagle-eyed fans noticing a pattern in the congratulatory posts from Kylie's friends and family following the birth.

At the time, one fan wrote: "It seems that the baby's name is Angel because of some comments made by close friends and Kylie Jenner's own family."

"It smells like Kylie Jenner's baby is called Angel. I have no proof and no doubts either," another added.

A third fan noted: "Kylie Jenner giving birth to her second baby on an angel number day (2/2/22) is the most Kylie Jenner thing ever."