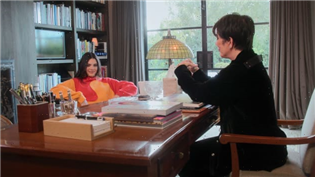 Very few of us can relate to world-famous supermodel multimillionaires, but Kendall Jenner has one element of Millennial relatability that her siblings lack:

She doesn’t have kids. She’s the only one of Kris Jenner’s progeny who remains childfree.

On this week’s episode of The Kardashians, we saw Kris aim to change that.

If Kendall’s not ready to pop out a marketable grandbaby, Momager Dearest wants Kendall to freeze her eggs.

On Season 1, Episode 7 of The Kardashians, Kris Jenner found herself in an unenviable position — as the bearer of bad news.

She had been contacted because Vogue wanted Kim for the cover, not Kendall. That is awkward as their mom and as their manager.

But Kendall handled the news gracefully. The awkward part came next.

Kris suggested that perhaps it is time for Kendall to think about something else.

Maybe giving Kris a grandbaby — since Kendall is the only one of her brood who has not.

Kendall began to choke on her drink, because of all of the things that her mom might bring up, this was not what she expected.

She is perfectly happy to not have any kids.

Not only is she a working professional and a complete person on her own, but she’s also only 26 — and may have only been 25 when this was filmed.

Kendall explained to the confessional camera that she is doing just fine.

She is making her own choices and finding herself.

Kendall isn’t dedicated to remaining childfree for life — or, if she is, she’s not saying so. She’s just not in a rush.

Speaking to Kris, Kendall reminded her that it’s her life and her body.

If Kris were being more sincerely pushy here (and were making these comments off-camera), this could be a more serious case of someone needing boundaries.

There are, after all, real people who think that their adult children somehow “owe” them grandchildren.

Instead, Kris was just being playfully pushy because they’re filming, and you’re not really supposed to hold back on reality TV.

Meanwhile, Kendall told the camera that she’s more than content to continue living life on her own for now.

She was diplomatic enough to resist pointing out that Kylie getting knocked up as a teen was never part of the plan, otherwise she wouldn’t be the only odd man out.

Kris decided to drop what we’re going to call an Egg Fact.

She cited that when she was pregnant with Kendall, Kendall’s eggs formed inside her — all before her birth.

That is true. While sperm are continuously generated in testes, ova are present from birth and are never generated again — only released.

While most of us know this from getting “the talk” when we’re like five, or from various biology classes or health classes growing up, Kendall cited a different source.

TikTok, the algorithmic nightmare app, had apparently reminded her of this recently.

Kendall was delighted to gain this bit of insight into her mother’s social media habits.

This, however, was when Kris opted to call the family doctor — over Kendall’s objections — to get her input.

“For Kendall, if she has a partner and they’re not married, I usually recommend at least a cycle of egg freezing,” Dr. A stated.

“It’d be a good time to freeze eggs,” the doctor opined. “The younger you are, the better quality.”

True though that may be, releasing eggs to be extracted and frozen is not as simple as producing a sperm sample. It’s not a terrible idea, but … there’s no rush.