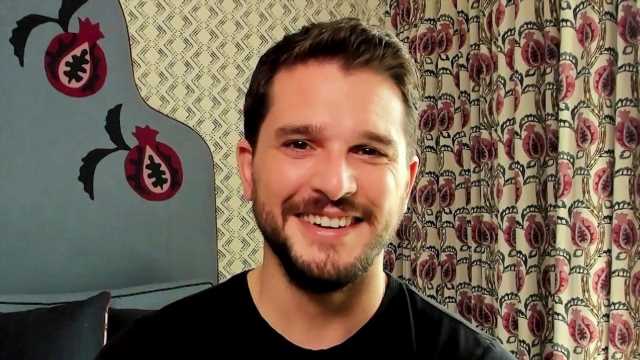 Kit Harington isn’t afraid to have a little fun.

During a visit to The Tonight Show on Thursday, the Game of Thrones actor opened up about life as a new dad and the lengths he’ll go to see his little boy smile.

“I’d do anything,” he gushed when Jimmy Fallon asked what Harington does to get a laugh from his 6-month-old son, who he shares with wife Rose Leslie. “Yeah, I think Rose is the one who he seems to respect and love, and she’s his safe place, and I just seem to be sheer entertainment. Do you know what I mean? And not even very good entertainment. Just entertainment.”

Harington went on to share that a sure fire way to get a giggle from his son is when the actor shows off his dance moves. “I used to be a good dancer, but I put him in his little chair, and he likes dancing to The Beatles,” he said. “But he only likes it if I do these exaggerated moves. I’ve worked out where the ‘dad dance’ comes from.”

Of course, Fallon didn’t let Harington get away with just explaining what the dance moves looked like — he also got the 34-year-old out of his seat to do a little jig, which involved a lot of leg kicks and pointing. You can see Harington’s epic moves at the 4:15 mark in the video below.

While Harington doesn’t mind looking silly in his own home, he’s not so sure how his new form of dancing will look in public. “Now I realize, I go back onto a dance floor, and I’ll dance like that but lost the old moves entirely,” he joked. “And then in the future, I know he’s going to mock me about it. And I’ll be like, ‘This is your fault.'”

Harington and Leslie — who met on the set of Game of Thrones and tied the knot in 2018 — confirmed the arrival of their son by stepping out with the newborn in London in February. In August, ET caught up with the doting new dad who shared how fatherhood has already changed him for the better.

“It has definitely softened a part of me,” Harington told ET’s Rachel Smith. “It has also taught me to look outwards a bit. I think all actors have a tendency of being egocentric and being self-obsessed, because our art and work is a projection and part of ourselves. Having a kid changes that somewhat. At the end of the day you are like, ‘I have this child to get back to.'”

Harington explained that he now puts “more pressure on myself as a new father but less as an actor.”

For more on how fatherhood has changed Harington, watch the video below.