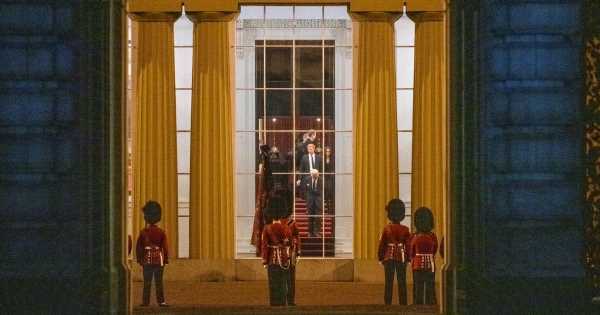 Moments beforethe Queen'scoffinarrived at Buckingham PalaceKing Charles III was photographed with his son and daughter-in-law the Duke and Duchess of Sussex.

This marks the first occasion the trio have been seen together since the Platinum Jubilee service of thanksgiving in June.

The photo showsthe new Kingstanding at the bottom of the staircase with his head bowed, awaiting the arrival of his late mother’s coffin.

Prince Harrycan be seen dressed in a black suit and tie, standing a few steps behind his father and next to his wifeMeghan Markle , who is also looking sombre and dressed in all black.

The Duke and Duchess of Sussex had previously reunited with the Prince and Princess of Wales in the days following the Queen’s death.

This marked thefirst appearance of the ‘Fab Four’as a group since 2020 and the group were dressed in all black as they walked along the gates of Windsor Castle, speaking to members of the public.

The reunion was a big step for the families coming together andThe Telegraphreported that Kate Middleton was said to have told a family in the crowd: "At times like this you’ve got to come together."

Today at 2:22pm, a procession will take place from Buckingham Palace to Westminster Hall, carrying the late Queen's coffin, as the King and his sons walk behind the coffin for its journey.

King Charles, the newPrince of Wales , Duke of Sussex,Duke of York ,Princess Royaland the Earl of Wessex will follow the coffin on foot.

TheQueen Consort , Princess of Wales,Countess of Wessexand Duchess of Sussex will travel by car.

Anne’s son Peter Phillips and her husband Vice Admiral Sir Tim Laurence will also walk behind the procession, as well as the Duke of Gloucester and the Earl of Snowdon.

The coffin, adorned with the Imperial State Crown, will be transported on a gun carriage of The King’s Troop Royal Horse Artillery from Buckingham Palace.

The King, members of the royal family and senior staff of the late Queen and King’s households will walk slowly behind in a dignified silence without music on a route that will take 38 minutes.

The procession is set to arrive at Westminster Hall at 3pm and a service lasting around 20 minutes will be led by the Archbishop of Canterbury accompanied by the Dean of Westminster.

Senior royals are also expected to pay tribute to Her Majesty, standing guard at some stage around the coffin for the Vigil of the Princes.

The lying in state opens to the public at 5pm and will be accessible 24 hours a day.