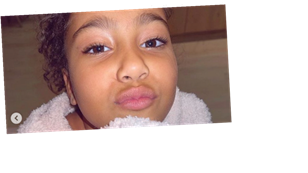 Keeping Up With The Kardashians star Kim Kardashian has revealed her daughter North West’s very unusual pet. The bearded dragon, Speed, has been part of the family for months now after Kim offered to babysit the reptile.

“Meet the newest member of our family… Speed,” wrote Kim in an Instagram post on Thursday. The 40 year old reality star and business mogul admitted she “really wasn’t planning on liking Speed” the way she does. “She grew on me!” Kim confesses.

She explained how the bearded dragon didn’t belong to her at first. “Speed was really my BFF Allison’s and we babysat for a week,” the star said.

“She never left and it’s been months! North and her bearded dragon go everywhere together it’s kinda cute.”

Not only is the pet a slightly out of the box choice, it also has a custom wardrobe of Skims Cozy Hoodies. In Kim's pictures, North and Speed are rocking their matching sets.

The mother-of-four commissioned a custom set of Skims outfits for her daughter’s reptile. “Speed got a makeover with custom Skims Cozy.” Responding to a comment, the KKW Beauty CEO confirmed that “Lizard Skims not available for purchase.”

The 26 year old Grammy nominated rapper, Lil Uzi Vert made headlines recently after he had a $24 million pink diamond embedded into the centre of his forehead. However, it turns out that aspiring rapper, North is way ahead of the curve.

Kim went on to reveal that “Speed actually got the jewel a few months back, North always knows what’s up!”

North West is Kim’s eldest child with rapper Kanye West. It was recently announced that Kim is filing for divorce after a period where the pair were reported to be living “separate lives.”

Kim put in for the separation after nearly seven years of marriage. It’s also been reported that, although Kanye, 43, designed the couple’s magnificent home, Kim is planning to be the one who stays there.

A source claimed to Us Weekly that Kim will not be moving out of their family home in the Hidden Hills. “She has made her life there and it’s her kids’ main home,” the insider said. “There was never a question — Kim was going to keep the home.”

All four of Kim and Kanye’s children – North, Saint, 5, Chicago, 3, and Psalm, 21 months – have spent their lives in the home Kim currently lives in, which is close to the rest of her family in Calabasas.