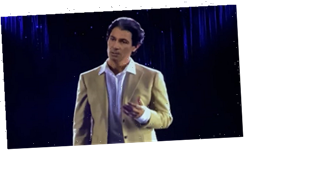 None of us can forget the ghoulish hologram of Kim Kardashian’s late dad that Kanye West conjured up for her birthday.

Now we know what Kim’s raw response was in the moment that she first saw the controversial light show.

Kim Kardashians shared a short video with her fans and followers.

In the video, she can be heard sobbing at the end of the holographic message that Kanye constructed and played of her late father, Robert Kardashian.

In the now-deleted, video, she is seated in a dark theater alongside Khloe, Kourtney, and their mother, Kris.

Each of the women is wiping away their tears as they view the video, which had a visual and audible likeness to Robert.

Though the ghoulish feat of technology is not unprecedented, a birthday present is certainly an unorthodox use for it.

“For my birthday, Kanye got me the most thoughtful gift of a lifetime,” Kim raved on Instagram after her birthday.

She even went so far as to describe the video as “A special surprise from heaven.”

“A hologram of my dad,” Kim described. Robert Kardashian passed away 17 years ago, in 2003.

“It is so lifelike and we watched it over and over,” Kimberly raved.

She added that she was “filled with lots so tears and emotion.”

“I can’t even describe what this meant to me and my sisters, my brother, my mom, and closest friends to experience together,” Kim expressed.

“Thank you so much Kanye,” Kim gushed to her husband, “for this memory that will last a lifetime.”

Kim’s post was largely ridiculed and memed, albeit less than her post about her 40th birthday party itself.

It’s not that people aren’t sensitive to the loss of a parent. But showing off extravagance during a pandemic is tasteless. And so were some of Kanye’s “creative choices.”

“Happy birthday Kimberly,” the eery display of light and sound said in the video. “Look at you, you’re 40 and all grown up.”

“You look beautiful just like when you were a little girl,” the impersonation of Robert Kardashian praised.

Veering into the weird, the hologram then claimed: “I watch over you and your sisters and brothers and the kids every day.”

“The most beautiful thing that I have witnessed is watching you grow your family…” the looming specter announced.

“Keep doing what you’re doing, Kimberley,” Robert’s facsimile encouraged. “Know that I am very proud of you and I’m always with you. I have built a firewall around our family.”

The most “questionable” line from the entire display was, naturally, Kanye giving himself unearned and unwarranted praise.

Kanye used technology to do the CGI equivalent of exhuming Kim’s father’s corpse turn into an aggrandizing puppet. Pretty screwed up.