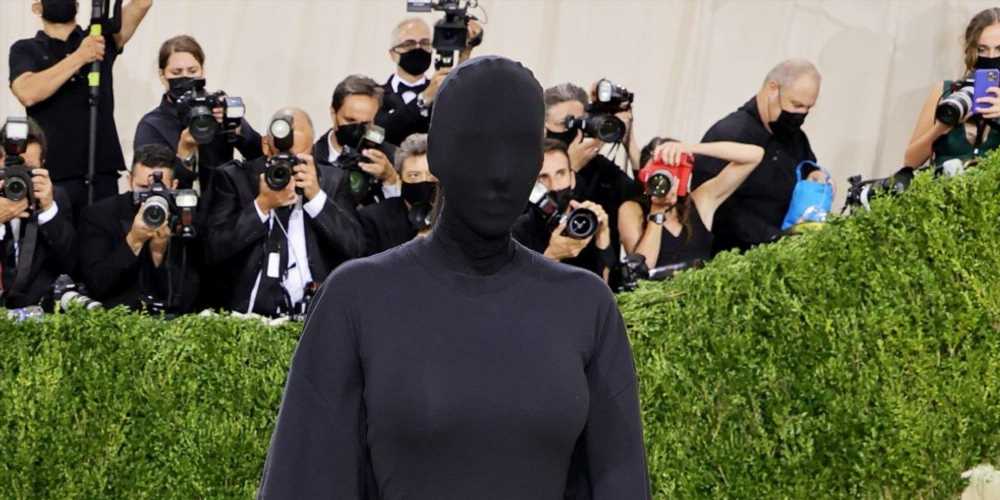 At last night's Met Gala, Kim Kardashian arrived with her entire body and face obscured by swathes of black Balenciaga jersey, but there was no question about who was under the face mask — ponytail or not. In a new Instagram post, Kardashian explained that the look, which was created by her pal (and Balenciaga creative director) Demna Gvasalia, was more American than anyone thought, comparing the head-to-toe monochrome look to a T-shirt and stating that was a way to showcase the Met Gala's theme, American Independence.

"What's more American than a T-shirt head to toe?!," Kardashian wrote alongside a gallery of her look, which incorporated a jersey cowl as well as a bodysuit, coordinating jersey boots, "Pantaleggings," and jersey gloves, Entertainment Tonight reports. Kardashian's gallery also includes behind-the-scenes looks at her getting ready, including time with her makeup artist.

Kardashian's new look, which started before the Met Gala with Kanye West's Donda listening parties, can be traced back to West himself. He introduced her to Gvasalia and together, they worked on a new way for her to express herself. It's not just about fashion, a source said, but also about creating a new subculture.

"Kanye gave her the courage to push creativity and people's imagination through art," the source told ET. "It's the ultimate confidence."

Kardashian spoke about her ex helping her find a new confidence during an appearance on Kristen Bell's podcast, We Are Supported By. She explained that West helped her step away from the constant need to be liked and to "live in the moment," instead.

"I used to care about the likeability," Kardashian said. "I got to a point — and maybe being in a relationship with Kanye for a decade and someone that absolutely didn't care about likeability factor or what any of perception of him was as long as he was true to himself — that taught me so much in the best way, of, just being me and living in the moment."